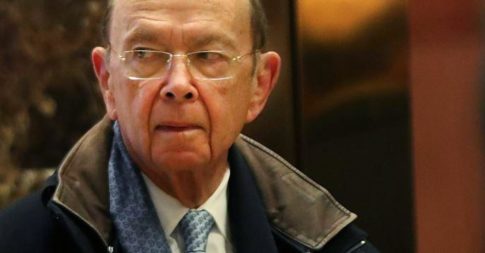 Read moreWhat Does He Know, That You Don’t? Commerce Secretary Wilbur Ross (Who Made His Money Working For Rothschild) Dumps Stocks, Buys Treasuries After “Ethics Warning”

– Ross Warns Of “Some Casualties” In Trump Trade War But Navarro Expects “No Retaliation”:

Following yesterday’s press reports that Steve Mnuchin and Wilbur Ross would be selected for two of the top economic posts in Donald Trump’s administration, earlier today the two confirmed their nominations to lead the U.S. Treasury and Commerce Department, respectively. Mnuchin and Ross spoke on CNBC’s “Squawk Box.”

Steven Mnuchin made his comments on “Squawk Box,” as his selection was being announced. He said he believes the U.S. economy can grow at a sustained rate of 3 percent to 4 percent. Fair trade will also help boost the economy, Mnuchin said — sentiments echoed on CNBC by Trump’s choice for commerce secretary, Wilbur Ross. Mnuchin said tax reform is going to be a major driver of that growth, and added that the Trump administration is going to bring a lot of money back into the U.S. by cutting the corporate rate to 15 percent. Read moreBillionaire investor Wilbur Ross: US in The Beginning of a ‘Huge Crash in Commercial Real Estate’