The studio also said it was immediately releasing accusers from non-disclosure agreements which Weinstein had used to silence them, allowing women to speak up without fear of retaliation.

“Even as the company heads into bankruptcy, the company remains committed to doing whatever it can to maximize value for its creditors and… continue its pursuit of justice for any victims,” it said.

The company added that it “cannot undo the damage Harvey Weinstein caused, but hopes that today’s events will mark a new beginning.”

– Uma Thurman Says Her Assault By Weinstein Was Like “A Bat To The Head”:

“It was such a bat to the head. He pushed me down. He tried to shove himself on me. He tried to expose himself. He did all kinds of unpleasant things…”

As Oprah’s supporters urge her to challenge Donald Trump in the 2020 election, Seal has made clear he isn’t a fan. The singer called the TV star “sanctimonious” and accused her of ignoring Harvey Weinstein’s misconduct.

Seal publicly slammed the American TV megastar on Instagram. The singer posting two photos of Oprah, one showing her kissing Weinstein on the cheek.

“When you have been part of the problem for decades, but suddenly they all think you are the solution,” a text overlay on top of the photographs reads.

“I forgot, that’s right … you’d heard the rumors but you had no idea he [Weinstein] was actually serially assaulting young stary-eyed (sic) actresses who in turn had no idea what they were getting into. My bad. #SanctimoniousHollywood,” Seal wrote. 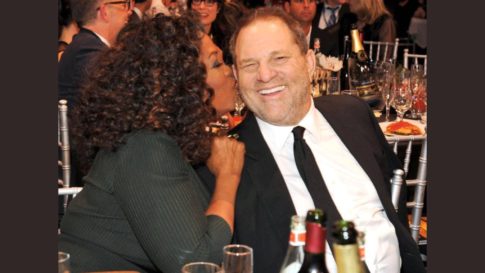 Disgraced movie mogul Harvey Weinstein – who sources tell Page Six is about to be indicted for rape by the Manhattan DA – used a network of attorneys, private detectives and a firm run by former Israeli Mossad agents in a failed attempt to silence his accusers and prevent The New York Times and The New Yorker from publishing allegations of sexual harassment, assault and rape – according to an explosive New Yorker article by journalist Ronan Farrow.

One of the firms employed by Weinstein, referred to him by Former Israeli Prime Minister Ehud Barak, was UK based Black Cube – which promotes itself as “a select group of veterans from the Israeli elite intelligence units,” set up a fake London wealth management firm and sent a female ex-Mossad agent posing as women’s rights advocate “Diana Filip” to befriend and spy on actress Rose McGowan.

– The (Authorized) Downfall of Harvey Weinstein