Disgraced movie mogul Harvey Weinstein – who sources tell Page Six is about to be indicted for rape by the Manhattan DA – used a network of attorneys, private detectives and a firm run by former Israeli Mossad agents in a failed attempt to silence his accusers and prevent The New York Times and The New Yorker from publishing allegations of sexual harassment, assault and rape – according to an explosive New Yorker article by journalist Ronan Farrow.

One of the firms employed by Weinstein, referred to him by Former Israeli Prime Minister Ehud Barak, was UK based Black Cube – which promotes itself as “a select group of veterans from the Israeli elite intelligence units,” set up a fake London wealth management firm and sent a female ex-Mossad agent posing as women’s rights advocate “Diana Filip” to befriend and spy on actress Rose McGowan.

“I took her to the Venice boardwalk and we had ice cream while we strolled,” McGowan told Farrow, adding that Filip was “very kind.”

When I sent McGowan photos of the Black Cube agent, she recognized her instantly. “Oh my God,” she wrote back. “Reuben Capital. Diana Filip. No fucking way.”

The same female agent from Black Cube posed as a different woman with a possible allegation against Weinstein in an attempt to trick various journalists working on unflattering Weinstein reports into revealing information about other accusers, according to Farrow’s report.

Weinstein’s contract with Black Cube lists primary objectives of “providing intelligence which will help the Client’s efforts to completely stop the publication of a new negative article in a leading NY newspaper,” as well as “Obtain additional content of a book which currently being written and includes harmful negative information on and about the Client.”

To execute the contract, Black Cube provided “a dedicated team of expert intelligence officers that will operate in the USA and any other necessary country,” including a project manager in charge of researching accusers, intelligence analysts, a full time agent “by the name of “Anna” who will be based in New York and Los Angeles, an investigative journalist, “Avatar Operators” – experts in social media, and “operations experts with extensive experience in social engineering.” 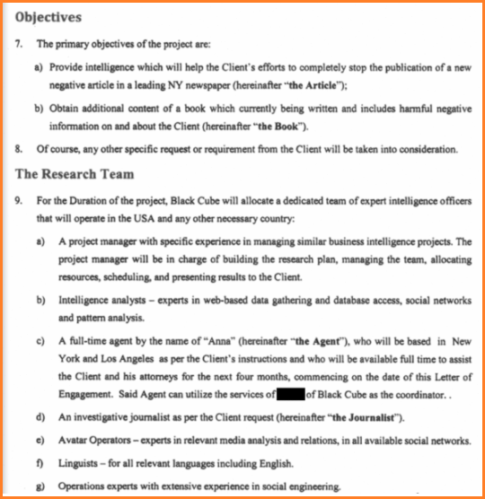 Other firms employed by Weinstein performed deep dives into the social and sexual histories of accusers thought to be working with journalists, digging for embarrassing or otherwise contradictory evidence that could be used to silence the actresses.

In order to attempt to cloak his spying activities with Attorney-client privilege, Weinstein used lawyer David Boies of the firm Boies Schiller Flexner L.L.P. to act as an intermediary, executing the Black Cube contract and possibly others.

In what appears to be an obvious conflict of interest, Mr Boies’s firm also provided The New York Times with outside legal counsel in three cases over the past decade – including one libel case. Upon hearing that Boies was representing Weinstein in an effort to halt the Times from publishing accusations against him, while at the same time representing the newspaper, The Times’s issued a stern statement Monday night:

“We learned today that the law firm of Boies Schiller and Flexner secretly worked to stop our reporting on Harvey Weinstein at the same time as the firm’s lawyers were representing us in other matters,” the statement read. “We consider this intolerable conduct, a grave betrayal of trust, and a breach of the basic professional standards that all lawyers are required to observe. It is inexcusable and we will be pursuing appropriate remedies.”

NYT deputy general counsel declined to elaborate on what those remedies might be, however he did say “I think that what they owe us is an explanation of what actually happened,” adding, “We need to know much more.”

During his months-long investigation into Weinstein, Farrow said that NBC – which employs him has a freelance correspondent, spiked his story before he took it to The New Yorker who agreed to publiss the report.  Appearing on MSNBC’s The Rachel Maddow Show, Farrow claimed that NBC News executives caved to pressure from Weinstein and his attorneys, including Lisa Bloom and David Boies. Maddow went on to tell Farrow “NBC says that the story wasn’t publishable, that it wasn’t ready to go at the time that you brought it to them.”

Farrow retorted, “I walked into the door at The New Yorker with an explosively reportable piece that should have been public earlier. And immediately, obviously, The New Yorker recognized that. And it is not accurate to say that it was not reportable. In fact, there were multiple determinations that it was reportable at NBC.”

On Tuesday, Farrow unleashed a Twitter storm accusing NBC of shutting down his story and even threatening his NBC producer’s job.

“My reporting is only possible because of a group of brave journalists who fought for the story,” Farrow began a 10-tweet thread.

My reporting is only possible because of a group of brave journalists who fought for the story & put up with this v tired reporter. (Thread)

“.@RichMcHughNBC, my wonderful producer, refused to bow to pressure to stop, through numerous shoots, even when it meant risking his job,” Farrow then tweeted.

.@RichMcHughNBC, my wonderful producer, refused to bow to pressure to stop, through numerous shoots, even when it meant risking his job.

As Fox reports: To add insult to injury, Farrow, whose Twitter bio currently describes him as an NBC reporter and “Today” show correspondent, appeared Tuesday morning on “Good Morning America,” arch-rival of the “Today” show, during the crucial November “sweeps” period. “GMA” described Farrow as a New Yorker contributor and mentioned NBC only when co-host George Stephanopoulos asked Farrow if Weinstein “got to” NBC when it decided to spike the original story.

“I think the story makes it clear [Weinstein and his team] were focusing on everyone trying to get word out about this,” Farrow said carefully.

Despite using the best spies money could buy to accomplish this task – including former agents of Israel’s Mossad, Weinstein was outed as a sexual predator by numerous accusers and may be in cuffs as early as next week.