American special operations units permanently deployed in Eastern Europe are no longer just on the Pentagon’s wish list. About 100 instructors are set to train spec ops teams in former Soviet bloc states to ‘message’ Moscow over the conflict in Ukraine.

The latest statements from the US European Command (EUCOM) once again prove that Washington is using the crisis in Ukraine to revitalize the NATO alliance and bolster its military presence in Europe in order to tie it to the US.

EUCOM said in a statement that its Special Operations Command Europe (SOCEUR) “increased the size and scope of its planned exercises” following the bloody developments in Ukraine to send a “message to Moscow.” 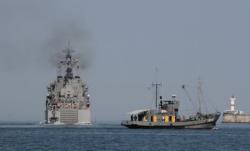 Several hours ago, Syrian president delivered his first public speech in months, addressing the internal military conflict that has gripped his country, and whose key excerpts can be found here. In it he called for a “full national mobilisation” to fight against rebels he described as al Qaeda terrorists. “We meet today and suffering is overwhelming Syrian land. There is no place for joy while security and stability are absent on the streets of our country,” Assad said in a speech at the opera house in central Damascus. “The nation is for all and we all must protect it.” Assad once again blamed the west for provoking and “facilitating” the rebellion, which even the NYT admits is being orchestrated by Al Qaeda, which naturally begs the question: just what is Al Qaeda to the US and to its intelligence agencies – foe or ally? But while providing fodder for the pundits, the speech was largely irrelevant. What does merit attention is the follow up to the story from two weeks ago the Russia sent two squadrons of ship to Syria in mid-December. It appears they have arrived, and just in time to offset the positioning of NATO Patriot missiles along the Turkish-Syria border.

Russia has concentrated five landing ships in the eastern Mediterranean in a show of force  meant to deter Western nations from intervening militarily in Syria, The Sunday Times quoted a Russian diplomat as saying.

According to the report, the ships are carrying military vehicles and hundreds of Russian marines, and are being accompanied by combat vessels.

The Israel Defense Forces and the United States European Command (EUCOM) completed a military headquarters training exercise in Tel Aviv on Wednesday night.The exercise was part of Juniper Falcon, an ongoing series of training exercises conducted by the U.S. Air Force in Europe and Israel.