Given California’s status as the largest and most economically productive US state, Trump’s reluctance to visit it has only strengthened the backlash against him. Trump has taken longer to visit California than any sitting president since FDR.

Of course, just because the police haven’t received permit applications, doesn’t necessarily mean he won’t be greeted by a swarm of protesters. LA Police are bracing for spontaneous demonstrations to erupt in the city’s streets.

Los Angeles Deputy Police Chief Horace Frank, who oversees the counterterrorism and special operations bureau, said that although no permitted protests in the form of marches are planned, authorities do expect to see both opponents and supporters out in numbers during a presidential visit.

“We are prepared for anything,” he said.

Smaller protests are also being planned in San Diego, where Trump is planning to visit eight prototypes for his planned border wall. California politicians have complained that Trump could’ve chosen to visit a wall prototype in another state – so his decision to visit the San Diego border is being interpreted as a deliberate provocation.

California Gov. Jerry Brown sent Trump a letter asking him to instead visit a high-speed rail project, which the governor said would fit squarely with Trump’s infrastructure push.

At least one protest is planned in Beverly Hills area between 4 p.m. and 8 p.m Tuesday by a Facebook group, Trump Not Welcome in LA. More than 1,000 people have indicated they will attend. The Los Angeles Police Department is preparing for many more protests of various sizes on the Westside. Trump’s earlier visits to L.A. while he was a candidate did bring out demonstrators.

Some protests are also planned for the San Diego area, where Trump is planning to visit one of the prototypes for his planned border wall. The visit has

Ron Gochez, a political secretary with political group Union del Barrio’s Los Angeles chapter, is organizing the Beverly Hills protest. The same group plans a rally against Trump on Monday evening in San Diego, the day before he arrives in the region to inspect prototypes for his proposed southern border wall. He plans to visit Beverly Hills the same day, where he plans to attend a Republican fundraiser.

As of Friday afternoon, Gochez said, more than a thousand people were following the Beverly Hills protest Facebook page even though he was still unclear about where the protest would take place.

“He cannot step foot in this state and not expect an organized response to denounce him,” Gochez said. “We have dignity and we can only demonstrate that through denouncing Trump and fighting for freedom from fear. We are not just going to stand with our arms crossed while they deport us or attack Muslims or women’s rights.”

While this isn’t the first time a state has so fiercely resisted the federal government, several southern states defiantly opposed desegregation, California’s situation is unique in that it’s such a large and important state to the US economy.

This isn’t the first time a state has so vehemently opposed a sitting president, said Louis DeSipio, a professor of political science at the University of California, Irvine.

For instance, a cluster of southern states stood in defiance in the late 1950s and early ’60s when the federal government sought to desegregate schools.

Still, California stands out in that “you’ve never had a state as large and as economically and politically important to the nation and the world standing in outright opposition to a sitting president on a number of policies, including immigration,” DeSipio said.

To be sure, more than 4 million Californians voted for Trump, and he’s not without his supporters in the state. Indeed, several pro-Trump groups plan to cheer the president on.

Of course, Trump does have his supporters in the Golden State. And a few groups plan to support him at a rally Tuesday morning near the border fence prototypes in San Diego.

Robin Hvidston, executive director of We the People Rising, a Claremont-based organization against illegal immigration, said she’ll be there. She’s heartened by the visit.

“I always point to the fact that more than 41/2 million Californians voted for Trump,” she said.

Hvidston said Trump’s visit demonstrates he is serious about the border.

Craig Griffin, a 71-year-old Paramount resident, said he supports the president’s immigration enforcement, but he doesn’t plan to attend any rallies. He’s hoping any anti-Trump protest will be peaceful.

“I think he’s been doing great,” he said. “He’s been shaking things up.”

Taken alone, California’s economy would be the sixth largest in the world – right behind the UK. Still, Trump’s visit will be exceedingly brief: He plans to make the five-hour flight there and back in one day – meaning his visit definitely won’t exceed 24 hours, per Bloomberg. 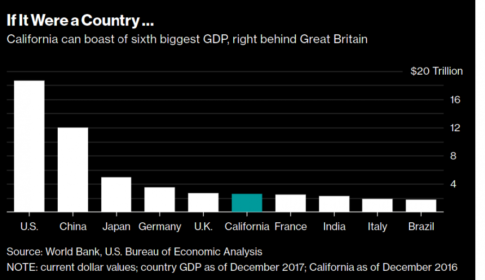 Trump is expected to avoid California Democrats like Nancy Pelosi, Maxine Waters and Adam Schiff, all of whom have positioned themselves as antagonists to his presidency.

Over the weekend, he bashed Waters during a rally in Pennsylvania, saying she has “a very low IQ”.

In addition to the DOJ lawsuit, Trump has threatened to pull ICE agents from the state, and has also threatened to cut off federal funding.

His threats prompted governor Brown to declare that the administration was “basically going to war against the state of California, the engine of the American economy.”

To be sure, California has lobbed several bombs at the administration and sought to sabotage its policies ranging from immigration to health care at every turn.

California Attorney General Xavier Becerra, who until last year represented downtown Los Angeles in the House for more than two decades, has filed 28 lawsuits against the Trump administration. He’s fought every version of the administration’s travel ban. He sued to block Trump from ending the Obama-era Deferred Action for Childhood Arrivals program that protects undocumented immigrants brought to the country as children from deportation. Becerra has also sued to prevent construction of the border wall.

California is also unique in that it has possibly the weakest state Republican party of any major US state.

Governor Brown is in his second consecutive term (and his fourth overall). Democrats control the cities and hold supermajorities in the legislature.

Only 14 of California’s 53 members in the House of Representatives are Republicans and several are seen as vulnerable in the 2018 midterm elections. Two of them, Representatives Darrell Issa and Ed Royce, have decided not to run for reelection.

In perhaps the biggest sign of the party’s weakness, it was unable to recruit a candidate with statewide name recognition to challenge Senator Dianne Feinstein, who has voted with Trump more than 30% of the time. This fact has not been lost on the ultra-liberal wing of the state party, which has fielded a left-wing challenger to primary the long-serving senator.

Trump received 31.6% of the vote in California in 2016, underperforming Mitt Romney in every county. Republican leaders in the state say their function is to export campaign donations to bolster the president’s 2020 run.

Tickets to Trump’s fundraiser on Tuesday in Beverly Hills, on behalf of the Republican National Committee, start at $35,000 and run as high as $250,000.

“We know our job here is to export dollars to win the presidential election in other places,” California Republican Party Chairman Jim Brulte said in an interview.

California politics are so lopsided that frustrated conservatives have started moving to Texas in droves instead of tolerating unaccountable Democrats.