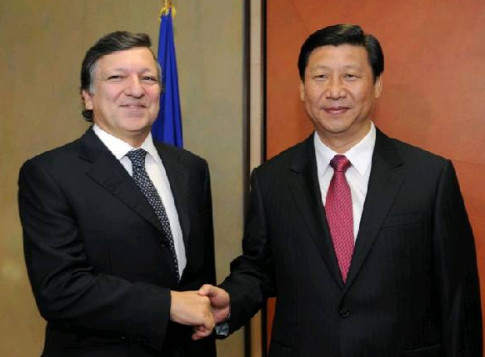 In addition, the Party’s appointments to the Politburo lacked a clear successor to Xi, another sign that he intends to seek a third term after the conclusion of his second term, which has only just begun.

As the NYT reports, citing local media, the Central Committee approved the amendments to the Constitution at a meeting last month. But the vague official announcement released at that time did not hint at the momentous expansion of Mr. Xi’s presidential power, which was kept secret until Sunday.

In another victory for Mr. Xi, the draft amendments to the Constitution would also add his trademark expression for his main ideas – “Xi Jinping Thought on Socialism with Chinese Characteristics for a New Era” – into the preamble of the Constitution, as well as adding a nod to the ideological contributions of his predecessor, Mr. Hu.

The amendments are almost certain to be passed into law by the party-controlled legislature, the National People’s Congress, which holds its annual full session from March 5. The congress has never voted down a proposal from party leaders.

“Sunday’s move will make Mr. Xi much more powerful than he already was, and will dampen any remnants of resistance to his rule”, said Zhang Baohui, professor of international affairs at Lingnan University in Hong Kong.

“Once people know he will serve for who knows how long, it will strengthen his power and motivate everybody to bandwagon with him,” said Mr. Zhang. “Any rival will think he will be almighty.”

In other words, “Dear Leader” has returned.

This historic shift was predicted by many since last fall, when Xi refused to appoint a successor as his power would begin to wane in a year or two as he entered what would’ve been a lame duck period for his presidency – the second half of his second term.

At the same party congress, Mr. Xi conspicuously broke with precedent by choosing not to name a pair of much younger officials to the Politburo’s ruling inner circle, the seven-member standing committee, to serve as his heirs-in-waiting. Instead, Mr. Xi chose men — no women — who were closer to his own age or older.

Mr. Xi’s strongman style has been compared to that of the Russian president, Vladimir V. Putin. But even Mr. Putin, who has amassed considerable personal power, did not try to erase his country’s constitutional limit on serving more than two consecutive terms as president as he approached that limit in 2008.

Instead, he arranged for a close adviser with limited personal influence, Dmitri A. Medvedev, to serve as president for a single term while Mr. Putin held the post of prime minister. Mr. Putin then returned to the presidency in 2012, and is running this year for re-election to another term.

Mr. Xi may now have even greater power, and the question will be how he chooses to use it.

“Xi Jinping is susceptible to making big mistakes because there are now almost no checks or balances,” said Willy Lam, an adjunct professor at the Chinese University of Hong Kong who is the author of a biography of Mr. Xi in 2015. “Essentially, he has become emperor for life.”

In another Xi-approved break with tradition, Wang Qishan, a close ally of the president’s who helped carry out Xi’s campaign against corruption and disloyalty in the party, appears set to return to power as vice president. Wang, 69, stepped down from a party position last year because of his age.

The announcement sheds new light on Xi’s decision to send to Liu He – one of his closest advisers and the most likely candidate to take over the PBOC later this year – to Washington on Tuesday. Instead of a trip to argue against Trump’s toughening stance on free trade, Liu may be heading to Washington to explain Xi’s decision to the Trump administration.

In kneejerk response, some China commentators had rather harsh words for the dramatic china, with WSJ commentator Li Yuan noting that “even though this has been talked about for a few years, it still feels like one man’s Pearl Harbor attack on the whole country.”

Even though this has been talked about for a few years, it still feels like one man’s Pearl Harbor attack on the whole country. https://t.co/BP4sdlciPl

As Yuan also notes, the local reaction to the news was also notable, with Baidu searches for “migration” spiking shortly after the news came out at 4pm local time.

Baidu searches for “migration” spiked after the news came out around 4 PM that China is eliminating a two-term constitutional cap on presidential terms. pic.twitter.com/2uUw41D0sy

During his time as president, Xi has launched grandiose initiatives like the “One belt, one road” initiative to build a modern Silk Road that would cement China’s position as a global hegemon to rival the US.

…Or as Ian Bremmer, founder and president of Eurasia Group, puts it…

One Belt.
One Road.
One Leader.