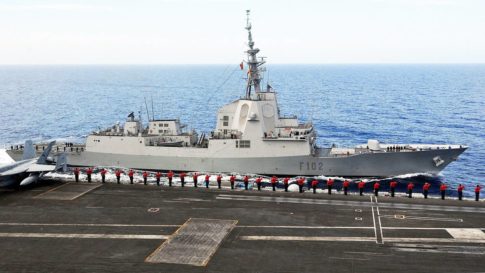 – New Frigate Program Heats Up As U.S. Navy Says It Will Pay Nearly $1B Per Ship:

As the U.S. Navy struggles to overcome multiple obstacles on its way to what it hopes will become a 355 ship Navy in the coming decades, the procurement of a guided missile frigate is becoming a top priority, and that’s a very good thing. Known as FFG(X), the program is really gaining steam with the Navy just announcing possibly the most important metric related to the entire program—what the Navy is willing to pay for each new frigate.

The project manager for the Navy’s future frigate initiative, Regan Campbell, stated on Tuesday that the Navy will be willing to fork over $950M for each of the 20 ships it currently plans on buying, aside from the first prototype ship that will cost more. This figure puts the notional FFG(X) squarely in the middle price-wise between an Arleigh Burke class destroyer and a Littoral Combat Ship, and that makes a lot of sense as the FFG(X) aims to bridge the glaring capabilities gap that exists between these two surface combatant types.

Defense contractors from around the globe are seeing this program as a rare opportunity to get a foothold in shipbuilding for the U.S. Navy, and multiple existing foreign designs could potentially be adapted for the Navy’s use. This is in addition to well-established domestic vendors that will be competing for the opportunity with their own designs as well. Supposedly about eight designs are being looked at by the Navy, all of which were submitted following the service’s initial RFP that was released last year.

Campbell told attendees of the Surface Navy Association’s annual conference and trade show that the force is going to issue up to half a dozen preliminary contracts to entrants so that they can fully spec out their proposals based on more detailed forthcoming requirements. The final award is tentatively planned for 2020, with the first ship being delivered in 2023.

USNI reports Campbell said the following as to how the Navy plans on giving feedback about the designs it likes before selecting the winner:

“We’re going to have a technical review of each of these proposals by the end and provide them feedback in where these designs might need some buffing up to get to a full and open competition… You will see those requests for proposals by the fourth quarter of 2019 with an award in 2020.”