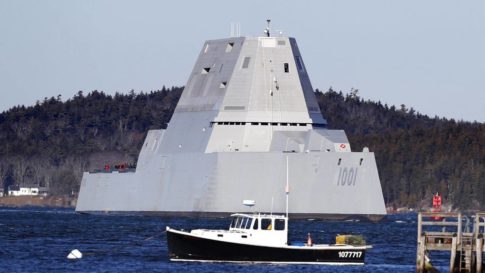 – The Navy Is Changing Its Plans for its Dumbed-Down Zumwalts and Their Ammoless Guns:

The future USS Michael Monsoor, set to become the U.S. Navy’s second stealthy Zumwalt-class destroyer, is underway for the first time for sea trials. The milestone comes as the service continues to reformulate the role of the ships, now saying they will be focused on attacking surface targets at sea, as well as on land, while the vessels’ future seems as uncertain as ever in the face of continuing budget shortfalls and personnel problems.

The second Zumwalt-class ship, also known as DDG-1001, sailed down the Kennebec River in Maine, on its way to the Altantic Ocean from Bath Iron Works (BIW) shipyards, giving journalists and others on the shoreline ample opportunity to grab a peek and take photos of one America’s most advanced warships. The Navy expects to commission the USS Michael Monsoor in 2018. BIW laid down the hull of the third and final ship in the class, the future USS Lyndon B. Johnson, in January 2017.

“Michael Monsoor (DDG-1001) is currently on Builders Trials, testing the hull, mechanical and engineering components of the ship,” Bath Iron Works said in a statement, according to the Portland Press Herald. “While all these systems are tested pier-side, there is no substitute for the real world testing taking place in the Gulf of Maine.”

Getting the second stealthy ship out to sea is an important achievement for both the Navy and BIW. The Zumwalt-class has been controversial to say the least and is the end result of a meandering set of often changing requirements and proposed ship concepts dating back to the 1990s.