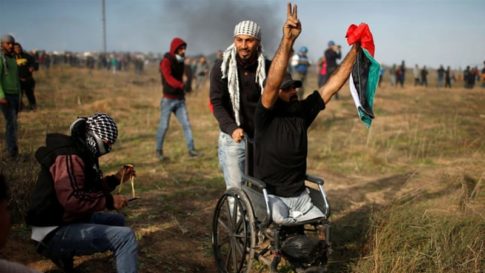 Two days before he was killed, Ibrahim Abu Thurayyah filmed a message to the Israeli army.

“I am passing a message to the Zionist occupation army,” the 29-year-old double amputee, who lost both of his legs and a kidney in a 2008 Israeli air raid, said.

“This land is our land. We are not going to give up. America has to withdraw the declaration it made.”

Before his death, the wheelchair-bound Abu Thurayyah had become a staple figure at protests along the Gaza Strip‘s border with Israel.

Since December 6, he and his fellow demonstrators decried US President Donald Trump’s decision to recognise Jerusalem as Israel’s capital. In photos, Abu Thurayyah can be seen climbing an electricity pole and sticking a Palestinian flag on it.

On December 15, Abu Thurayyah was fatally shot in the head by an Israeli sniper.

Another Palestinian, Yaser Sukkar, was killed the same day while protesting at Gaza’s border. Two others were killed by the Israeli army in the occupied West Bank, bringing the death toll since Trump’s decision in the first week of December to ten Palestinians.

On Saturday, funerals were held for Abu Thurayyah and the three other Palestinians killed a day earlier.

Al Jazeera’s Alan Fisher, reporting from Abu Thurayyah’s funeral procession in Gaza, said thousands of people had taken to the streets to pay their respects for “unlikely figure of Palestinian resistance and defiance”.

“He would often leave his wheelchair at home and attend rallies in protests around Gaza City just carrying his Palestinian flag,” said Fisher.

“He was carrying that flag when he was shot by the Israelis.”

Imagine the skill and training needed to kill off a charging double amputee?

They deserve an appropriate medal for….erm….cowardice.”