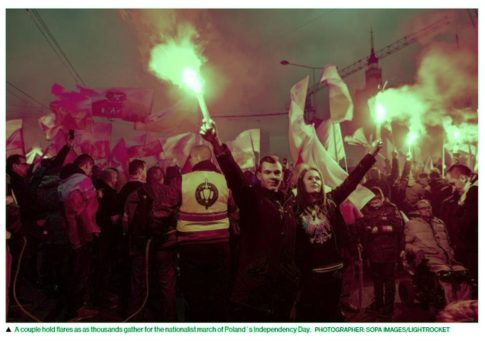 The Polish government increasingly defies EU rules. Since Poland is the largest aid recipient, the EU is hopping mad.

Poland, Hungary, and the Czech Republic are all in open defiance of EU migration rules.

In addition, Poland’s Law & Justice party move to take control of the courts was condemned by the European Parliament and European Commission.

The situation is now to the point where various countries want to shut off aid to Poland, but given the EU treaty makes penalizing countries extremely difficult.

Behind the noise of Brexit negotiations, the talk in the European Union this year has been that there’s potentially a bigger problem in the east. And the prospect of another rupture looks to be increasing.

The mood in Brussels is that EU institutions can no longer stand by and watch a country that’s the biggest net recipient of European aid thumb its nose without paying some sort of price. Few people are discussing Poland following Britain out of the bloc, but a protracted conflict is getting more likely.

Concerns about the shift in Poland triggered calls to limit access to EU funds for countries disrespecting the democratic rule of law.

This week, Poland’s refusal to take in mainly Muslim refugees was referred to the European Court of Justice along with Hungary and the Czech Republic.

“There is a growing feeling in Brussels that solidarity cannot be a one-way street, and that it becomes difficult to justify the 10 billion-euro per year net transfers for a country that is increasingly at odds with the bloc’s values,” said Bruno Dethomas, a senior policy adviser at GPLUS consultancy in Brussels and a former EU ambassador to Poland. “It is high time the EU reacted, or it risks losing its soul.”

“Hostility towards the EU is part of Law & Justice’s DNA, and if it was up to the party, Poland would leave the bloc,” said Marcin Matczak, a law professor at Warsaw University. “But Kaczynski knows he can’t do that because Poles are benefiting from EU membership. Hence, the party slowly builds a negative attitude towards EU — while declaring that Poland has no intention of leaving.”

What Can the EU Do?

A fundamental problem in if EU treaty makes the situation difficult to address.

It takes unanimous agreement to do practically anything. Trade treaties are especially difficult. And there is no way to kick a country out of the block.

This problem was well understood from the outset, but Germany never wanted to be in a position where other countries could outvote it.

So here we are.

If the EU does find a way to punish Poland and cut off funds, it may drive Poland out of the block. The same applies to the Czech Republic and Hungary over migration rules.

Eventually things are going to splinter, and likely at the worst possible time.