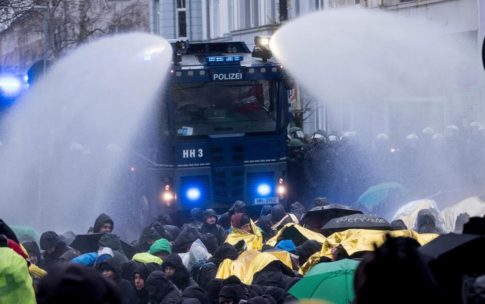 BERLIN (AP) — German police have used water cannons to disperse hundreds of protesters, who tried to block access to a nationalist party convention in Hannover. Clashes between police and protesters on Saturday briefly delayed the opening of the Alternative for Germany’s gathering.

The party, which won seats in parliament for the first time this year, has a leadership race this weekend to fill a void created when its best-known figure abruptly quit. Alternative for Germany co-chair Frauke Petry quit the party, known as AfD, in September, accusing it of flirting with far-right extremism.

Petry’s departure left her rival, Joerg Meuthen, alone as chairman. Meuthen is vying for re-election Saturday at the party’s meeting in Hannover. It’s not clear if AfD will decide to have one or two chairs.

“Here it looks like free speech and rights are being attacked in Germany, presumably funded by the well known Hungarian jew puppet of the Rothschilds.”