The Japanese have their non-nagging synthetic wives, the Saudis have their Shariah-compliant humanoid citizens, Americans are content with a backflipping supra-human, and now the Chinese get their very own 50lb, poop-less, robo-dog…

Meet Laikago – named after Laika, a Soviet dog who was the first living creature to orbit the Earth. 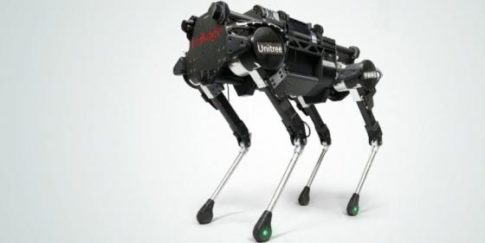 The Chinese-made robot dog weighs 22kg, a bit less than a common Labrador, and is around 60cm tall.

“We have popularized Laikago among science and technology companies, and science fans. So Laikago is a scientific toy.”

The four-legged mechanical pet is able to run on grass and can assimilate canine-like movements, just like a flesh-and-blood pooch.

The initial price for Laikago will be around US$25,000, but may drop in the future.

No doggy-doo, vet visits or bones… now everyone can buy a robot canine online and enjoy spending time with their new four-legged friend (admittedly perhaps not the cuddliest or most-loving version of “man’s best friend,”) feeding it only with electricity.

The makers did not comment on whether RoboDog is so lifelike as to hump your leg or drink from the toilet.