One day before meeting with the leaders of Iran and Turkey in the Black Sea resort of Sochi, Russian President Vladimir Putin held a surprise meeting with his Syrian counterpart, Bashar al-Assad, kicking off a diplomatic drive this week to outline the terms of an end to the Middle Eastern country’s bloody civil war. The two leaders discussed the political process in Syria, with the Russian leader saying that the fight against terrorism in the crisis-stricken country is close to completion. Perhaps even more notably, Putin said he would speak by phone with President Donald Trump later Tuesday.

Assad’s visit, which wasn’t publicly announced until the following day, echoed a similar trip to Russia that he made in 2015 shortly after Putin launched his air and ground campaign in Syria. The campaign turned the tide in the war in favor of the embattled Syrian president, whom western nations have long sought to see removed. 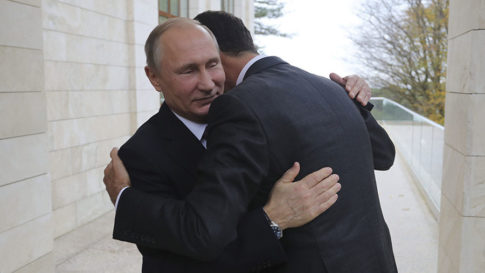 Following a two-year Russian intervention in the region, which has resulted in the defeat of the Islamic State in Syria and the preservation of the Assad regime, the Kremlin is moving on to bring together regional and global powers to revive long-stalled efforts to reach a settlement expected to cement the Syrian president in power. Following the meeting with al-Assad, putin will meet with Erdogan and Rouhani on Wednesday to discuss the political resolution to the Syrian civil war. The Kremlin said he held talks with the Emir of Qatar on Monday, Bloomberg reported. 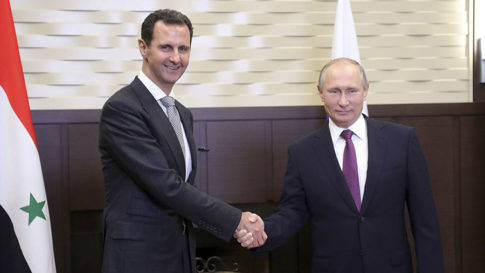 “The most important question of course is what will happen after the defeat of the terrorists in terms of a peaceful political settlement,” Putin told Assad during their meeting in Sochi, noting the Syrian leader’s support for a Russia-backed peace plan, according to a Kremlin transcript.

In the Tuesday meeting, Putin congratulated Assad on the results in the fight against terrorism; during his trip to Sochi, the Syrian president became acquainted with the heads of the Russian military. The Russian leader discussed the political settlement in Syria with al-Assad, saying that he believes it should be under the aegis of the UN, adding that he hopes the international body will take an active part in the process and its final stage.

Putin presented Assad to the military commanders who led Russia’s effort. “I want to introduce to you the people who played a decisive role in saving Syria,” Putin said. 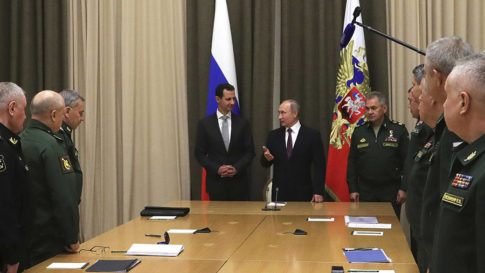 “Today, on behalf of the Syrian people, I extend my gratitude to you for what you did,” Assad said. “We will never forget it.”

Expressing thanks for Russia’s role, Assad said the time is right for negotiations, “especially after we attained victory” over the government’s opponents. He added: “We’re counting on Russia’s support to ensure the non-intervention of outside players in the political process, so that their role is to support the efforts of the Syrians themselves.” He added that he hoped for Russia’s help in ensuring that the Syrians themselves lead the process, with help from the outside, but not “interference.” “We welcome those who are really interested in a political settlement [in Syria], we are ready to have dialogue with them.”

According to the Russian president, “the problem of terrorism is a global one.” He added that “complete victory over terrorism is still very far away. But as far as our joint fight against terrorists in Syria is concerned, this military operation is really coming to an end.” Putin also said he will meet Turkish President Recep Tayyip Erdogan and Iranian President Hassan Rouhani in Sochi on Wednesday to discuss the Syrian crisis. Apart from these countries, Russia is working with Iraq, the US, Egypt, Saudi Arabia, and Jordan on settling the crisis, he stated. Putin added that on Tuesday he will hold a phone conversation with US President Donald Trump on the topic of Syria.

According to Bloomberg, Putin’s triumphant tone underscores his success in turning the tables on the U.S., which under Trump’s Democratic predecessor Barack Obama pressed for Assad’s removal and came close in 2013 to ordering strikes on Syria in retaliation for a chemical attack blamed on the regime. Six and a half years after an uprising in Syria morphed into a regional proxy war and terrorist conflict that killed 400,000 and displaced millions, Russia’s Syrian ally is now looking for a stamp of international legitimacy

Russia has been working actively with Saudi Arabia and other backers of Assad’s opponents such as Turkey to restart the peace process. On Wednesday, the Saudi government hosts a meeting in Riyadh of opposition groups that aims to combine them into a single delegation for peace talks in Geneva.

The unified bloc, including factions less hostile to Assad, would be a “tame” counterparty for the Syrian regime at the negotiating table, said Robert Ford, a former U.S. ambassador to Syria who’s now a fellow at Yale University and the Middle East Institute in Washington.

Meanwhile, in another surprising development, on Monday former Syrian prime minister Riad Hijab, who defected and headed the main Western-backed opposition group for the past two years, resigned without giving any explanation, according to a statement on his official Twitter account.

AS BBG adds, Hijab’s High Negotiations Committee earlier this month refused to attend the Russian-led peace conference between Assad and opposition groups in Sochi, saying it was usurping the role of long-stalled negotiations in Geneva chaired by the United Nations. Ironically, the Russia-centered organization appears to have achieved more for Syrian military descalation in two years than the UN could do in more than six.  Russia has now revived the proposal for the Sochi meeting, which is expected to take place soon.