The rise in Bitcoin’s price was approaching “warp speed” above $8,200 overnight when, as so often happens, it went into another sharp reversal. After hitting an intra-day high of almost $8,265 in early trading on Tuesday, the price crashed more than $400 to $7,827, its biggest drop since November 13. This time it wasn’t another Dimon-esque rant, or the prospect of another fork (technically, these are bullish) but an old-fashioned theft in another cryptocurrency, Tether. Tether is a controversial crpto-business which provides a wallet service allowing crypto exchanges to store and convert fiat currencies to “safe” tokens (not to be confused with an ICO token) and vice versa.

So the price of $BTCUSD dropped almost $500 on the #Tether hack news. If YOU decided to panic sell your #Bitcoin (or #Altcoin) for $USDT please explain your logic. I would love to hear it ???? pic.twitter.com/79AtmgGbRo

Tether has a market cap of roughly $673 million and is the world’s nineteenth largest cryptocurrency, based Coinmarketcap.com data. Regarding the theft, Tether alleges that $31MM of USDT tokens (Tethers trading at parity with the dollar) were stolen on 19 November 2017.

From the Tether press release:

Yesterday, we discovered that funds were improperly removed from the Tether treasury wallet through malicious action by an external attacker. Tether integrators must take immediate action, as discussed below, to prevent further ecosystem disruption.

$30,950,010 USDT was removed from the Tether Treasury wallet on November 19, 2017 and sent to an unauthorized bitcoin address. As Tether is the issuer of the USDT managed asset, we will not redeem any of the stolen tokens, and we are in the process of attempting token recovery to prevent them from entering the broader ecosystem. The attacker is holding funds in the following address: 16tg2RJuEPtZooy18Wxn2me2RhUdC94N7r. If you receive any USDT tokens from the above address, or from any downstream address that receives these tokens, do not accept them, as they have been flagged and will not be redeemable by Tether for USD.

What is especially troubling, is how easy it was – in retrospect – to “steal” over $30MM worth of cryptos and send them on to a “non-extradition” address. As per Tether’s announcement, the $31MM was simply sent to “an unauthorised Bitcoin address.” While likely futile, the company took steps to recover the loast money: as The Crunch reports:

In response Tether said it has flagged the tokens — meaning that it will track them and prevent the holder from exchanging them through its service — and that it is working to recover them. For partners, the back-end wallet service has been suspended. Tether said it will investigate the incident while it rolls out an update to Omni Core — its software for partners — that will prevent the stolen coins from recirculating into its ecosystem by essentially locking them into the alleged hacker’s wallet.

Where things begin to get murky, is the extent to which there may or may not be a relationship between Tether and another controversial player in the cryptocurrency space, Bitfinex. The latter is the major crypto exchange which was famously hacked in 2016, after which the Bitcoin price fell 20%. The Crunch notes that some crypto players are already expressing concern about a potential “inside job”.

One of the partners that uses Tether is crypto exchange Bitfinex, which itself lost 119,756 bitcoin — then worth $72 million but valued at over $950 million today — in a hack over a year ago. As Coindesk reports, the incident is sure to throw up more questions about the relationship between Tether and the secretive exchange Bitfinex. The duo are rumored to share owners, and have been accused of leaning on each other to manipulate the market. Already, there are theories circulating that suggest this new attack could be an inside job.

This latest hit to Bitcoin is likely to prompt more discussion of the relative advantages of gold versus Bitcoin. In a recent post On Zero Hedge, John Rubino cited an article on the Risk Hedge website “All the Reasons Cryptocurrencies Will Never Replace Gold as Your Financial Hedge” in which security was highlighted as one of the key risks for cryptos.

Security is a major drawback facing the cryptocurrency community. It seems that every other month, there is some news of a major hack involving a Bitcoin exchange.  In the past few months, the relatively new cryptocurrency Ether has been a target for hackers. The combined total amount stolen has almost reached $82 million.

Bitcoin, of course, has been the largest target. Based on current prices, just one robbery that took place in 2011 resulted in the hackers taking hold of over $3.7 billion worth of bitcoin—a staggering figure. With security issues surrounding cryptocurrencies still not fully rectified, their capability as an effective hedge is compromised. When was the last time you heard of a gold depository being robbed? Not to mention the fact that most depositories have full insurance coverage.

In another recent post, “Doomsday Preppers Are Switching Allegiance From Gold To Bitcoin”, the issue of security was also prominently discussed. However, for preppers, the main issue was what would happen if the grid failed. As we’ve suggested, it’s hardly surprising given Bitcoin’s performance that investors and preppers alike have switched their allegiance towards the pre-eminent crypto-currency. However, more events like this, will only add to the view that there is a place in portfolios (and bunkers) for both. After Bitcoin topped $8200 yesterday, we noted the following amusing comment from currency brokerage ForexTime.

“I find it remarkable and somewhat frightening how, no matter how much Bitcoin is pummeled by sellers, it simply bounces back even stronger.”

We’re not there yet, but the price is already closing in on the pre-theft record high of $8,300 as we write. 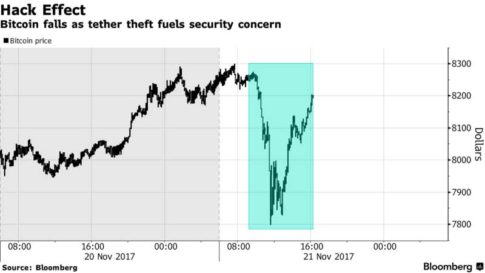 And, as Bloomberg adds, the incident is the latest in a long list of hacks which while denting confidence in the security of cryptocurrencies, “typically have fleeting market impact: bitcoin has surged to one record after another during the past few years despite major thefts from exchanges including Bitfinex and Mt. Gox.”