– Hundreds Of Tanks And Howitzers From The United States Arrive In Poland:

One day before Russia kicked off its “Zapad 2017” military exercise, dubbed the “biggest display of Russian military power since the end of the Cold War”, on September 13 American military equipment arrived in the port of Gdansk, Radio Poland reports, where more than a thousand pieces of American military equipment from the Second Anti-tank Brigade Combat Team were unloaded at the port, including Abrams tanks, Bradley combat vehicles, Paladin howitzers and other combat equipment. This is the first shipment of equipment to arrive in Poland under the initiative Operation Atlantic Resolve according to UA Wire. 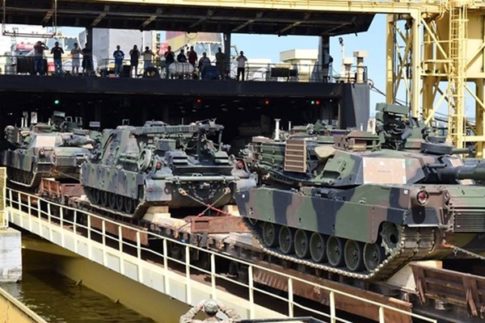 According to the General Commander of Poland’s Armed Forces, General Jaroslaw Mika, the equipment will be used during military exercises.

“This military equipment, which we see today, will be located in the western part of Poland. I mean, first of all, in such areas as Boleslawiec, Zagan, Torun, Swietoszow, and Skwierzyna. This equipment will be used in various maneuvers and training. This is a brigade fighting group. At this point, I want to emphasize the scale of the Dragon 17 exercises. This is 17,000 soldiers from 11 countries. I think that these figures are quite impressive if we are speaking about the activity of the NATO member countries, as well as the use of America’s potential,” he said.

On Thursday, the first train with American weapons departed for the place of permanent deployment.

The goal of Operation Atlantic Resolve, as discussed previously, is to assure the continued presence of U.S. troops in Central and Eastern Europe. The Dragon17 exercises, which will be held September 25-29, will be the largest exercise held this year in Poland.

Earlier this year, American troops were deployed to bases across Poland on a rotating basis as reassurance amid Russia’s increased military activity. As mentioned yesterday, leaders in Poland, the Baltic states, Slovakia, Romania and Bulgaria are concerned Russia might not pull back all of its soldiers after the drills.

Meanwhile, despite NATO Secretary-General Jens Stoltenberg statements that the “Zapad-2017” Russia-Belarus joint drills aren’t considered a threat by the alliance, the Pentagon has said that it is “closely watching” the war games anyway.

“The US Department of Defense is closely observing watching joint Russia-Belarus Zapad 2017 drills”, Pentagon spokesperson Rob Manning said in a briefing on Friday.

“We are watching Zapad very closely. Obviously Russia has the right to conduct their own exercises,” Manning added.

Previously, NATO Secretary General Jens Stoltenberg said that the alliance does not see any imminent threat posed to against any NATO member by the drills.

In turn, senior Russian and Belarusian officials reiterated that the drills do not pose any threat to other states and are exclusively defensive in nature. Moreover, Belarus President Alexander Lukashenko stated earlier that these exercises would be open for foreign observers. The Defense Ministry of Belarus reported in August that observers from seven countries — Ukraine, Poland, Lithuania, Latvia, Estonia, Sweden, Norway — were invited to the event. Russian President Vladimir Putin is expected to observe the drills on September 18. When commenting on NATO states’ reaction to the planned drills, the Russian Foreign Ministry said earlier that increasing military presence of NATO in Eastern Europe went unnoticed amid groundless criticism of the Russian-Belarusian Zapad-2017 military exercises.

Moscow has repeatedly criticized the increased presence of the alliance’s troops and military facilities near the Russian border. Moscow has said Russia had never planned and does not plan to attack any NATO member.

Meanwhile, with verbal accusations being lobbed between Russia and NATO, and achieving nothing to halt the proliferation of weapons on both sides of the renewed “cold war” conflict, the heavily armed build up continues unabated.