Many contend that self-driving trucks and cars will not happen anytime soon for numerous reasons (most of them easily refuted).

One of the reasons is of lack of approval from Congress.

That argument will go on the ash heap of history by the end of the year because a bipartisan House Panel Approves Legislation Speeding Up Deployment of Self-Driving Cars. 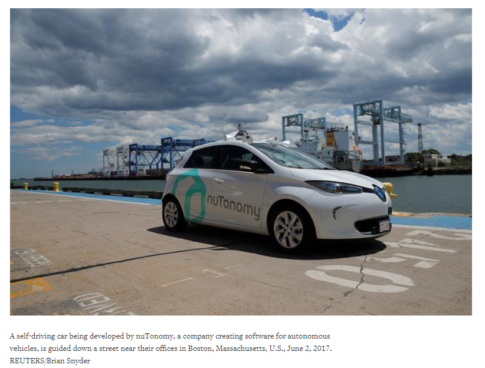 An influential U.S. House committee on Thursday approved a revised bipartisan bill on a 54-0 vote that would speed the deployment of self-driving cars without human controls and bar states from blocking autonomous vehicles.

The bill would allow automakers to obtain exemptions to deploy up to 25,000 vehicles without meeting existing auto safety standards in the first year, a cap that would rise to 100,000 vehicles annually over three years.

Automakers and technology companies believe chances are good Congress will approve legislation before year end. They have been pushing for regulations making it easier to deploy self-driving technology, while consumer groups have sought more safeguards. Current federal rules bar self-driving cars without human controls on U.S. roads and automakers think proposed state rules in California are too restrictive.

The House of Representatives will take up the bill when it reconvenes in September, while senators plan to introduce a separate similar measure.

“Our aim was to develop a regulatory structure that allows for industry to safely innovate with significant government oversight,” said Representative Greg Walden, who chairs the House Energy and Commerce Committee.

Initially, authors proposed to allow automakers and others to sell up to 100,000 vehicles immediately. Representative Frank Pallone said the phase-in period was essential so “millions of exempted cars will not hit our roads all at once.”

Under the House proposal, states could still set rules on registration, licensing, liability, insurance and safety inspections, but could not set self-driving car performance standards.

Automakers praised committee passage, while Consumer Watchdog privacy director John Simpson said preempting state laws “leaves us at the mercy of manufacturers as they use our public highways as their private laboratories.”

Automakers say that without changes in regulations, U.S. self-driving car testing could move to Europe and elsewhere.

This is playing out exactly as I expected. In 2018, there will be 25,000 cars and trucks on the and highways and in cities, driving themselves. I suspect most initial testing will be on highways. If that goes well, there will be 100,000 self-driving cars on the roads by 2019-2020.

Then, once things go well, and I expect them to go well, most of the trucks on the highways will be driverless.

From driver to driverless interstate trucking will take less than a year once final approval is given, no later than 2022, and possibly as soon as 2020.