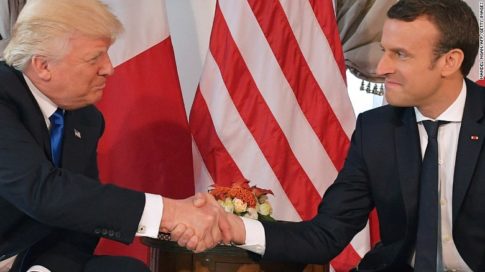 – Macron Invites All Americans Disappointed With Trump To Flee To France:

French President Macron invited American citizens – especially those with a higher education – who are disappointed with Trump’s decision to pull out of the Paris accord, to help “make our planet great again” by moving to that bastion of liberal global values, France , where they will find “a second homeland.”

In a short address to Americans following Trump’s announcement to withdraw from the Paris climate accord, the French leader said that while he respects President Donald Trump’s decision, he believes it was a “mistake” and invited all Americans (ideally those with a college education) to come join him in France “to work together on concrete solutions, for our climate, our environment.”

And, to show just how progressive he truly is, the French president called on all US “scientists, engineers responsible citizens who were disappointed by the decision by the President of the United States, I want to say that they will find in France a second homeland. I call on them: Come and work here with us. To work together on concrete solutions, for our climate, our environment.”

If the world doesn’t tackle climate change, Macron says, our children will face a dystopian future punctuated by famine, wars and grinding poverty or in other words, he described reality in much of the developing world, especially those nations which the US and French military forces have decided represent geopolitical “national interests.”

Some were quick to point out the self-serving nature of Macron’s offer: after all if Macron’s imagined exodus of American STEM graduates fall short of saving the planet, maybe they can do something about saving the French economy from years of socialist rule (and a regime in which Macron himself was a minister).

Some have also asked if Macron is so worried about the future of the world, why then did he claim – together with counterparts in Germany and Italy – that the agreement cannot be renegotiated, an option to which Russian leader Vladimir Putin seemed amenable. A cynic could allege that France (and its peers) are more focused on the benefits the existing arrangement affords them, than sitting down and doing everything in their power to come up with a new deal that is agreeable to all, even Trump, in order to “make the world great again.”

Macron’s full remarks are below:

Climate change is one of the major issues of our time. It is already changing our daily lives but it is global. Everyone is impacted and if we do nothing our children will know a world of migrations, of wars, of shortage… a dangerous world.

Today, the President of the United States Donald Trump announced his decision to withdraw the us from the Paris Agreement. I do respect this decision but I do think it is an actual mistake, both for the us and for our planet.

To all scientists, engineers responsible citizens who were disappointed by the decision by the President of the United States, I want to say that they will find in France a second homeland. I call on them: Come and work here with us. To work together on concrete solutions, for our climate, our environment.

I can assure you France will not give up the fight. I can affirm clearly that the Paris agreement remains irreversible and will be implemented not just by France but by all the other nations. Over the coming hours, I will have the opportunity to speak with our main partners to define a common strategy and to launch new initiatives. I already know that I can count on them. I call on you to remain confident we will succeed because we are fully committed. Because wherever we live, whoever we are we all share the same responsibility: make our planet great again.

For those asking, as of this moment there are no long – or even short – lines outside the ten French consulates in the US, as Americans, even scientists, appear to be in no rush to take the French president on his offer.