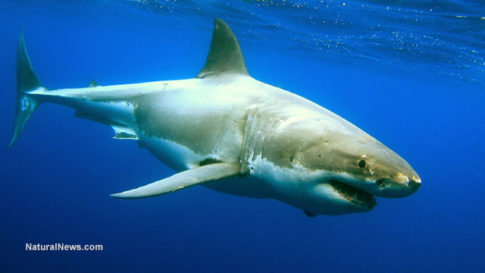 – Mass die-off in the Pacific as hundreds of sharks wash up on the shores of San Francisco:

Ohia.org reminds us that sharks are both scavengers and super -predators, who greatly assist in keeping the ocean’s ecosystem balanced. Sharks eat fish that are the “weakest, sick or dead,” and also “maintain prey species diversity” by keeping other predator species in check. A decline in shark populations not only threatens fishery operations, but can also indicate deeper problems within our ecosystem. This may be the case in the waters of the Pacific Ocean off the coast of San Francisco, where for more than seven weeks, hundreds of Leopard sharks have been found dying, or dead, as reported by the San Francisco Gate.

This isn’t the first time the Leopard shark has had a die-off. US.BlastingNews.com states that the Leopard shark had a population decrease in 2016, as well as in 2011, when a thousand dead leopard sharks perished and washed up on shore with scientists estimating those numbers might be much higher. This year’s die-off could be “in the thousands,” as well. According to Sean Van Sommeran, founder and executive director of the Pelagic Shark Research Foundation, an education and shark research consortium based in Santa Cruz, California, this event could be “just the tip of the iceberg.”

The epicenter where many of the dead sharks have been found is Redwood City, California. This has led Van Sommeran to surmise that the cause of the deaths can be attributed to the closing of the Redwood City tide gates during low tide, which is done to prevent flooding during the rainy season. When the tide is low, however, the leopard sharks are making their way into the shallower waters to mate. When those flood gates close, the sharks get trapped and exposed to storm water runoff, which contains what Van Sommeran calls “extra crud going into the watershed.” The water inside the gates becomes stagnant and creates a toxic environment in which the shark cannot survive. When the tide gates are reopened, those rotting carcasses of dead sharks are released into the waters and then contaminate others.  Here’s a brief synopsis of the current explanation of this year’s  die-off, which is still in progress:

But is stagnant water inside a flood gate the only explanation for what could be thousands of more deaths? Certainly not, according to AllNewsPipeline.com, which explains that in the six years since the Fukushima nuclear catastrophe, there have been “mass deaths throughout the Pacific Ocean and the West Coast,” starting with one-celled organisms and smaller creatures, then moving on to the tuna fish and now up the food chain to an important ocean predator.

There have been other instances of different species of West Coast sharks dying from unusual circumstances. Unknown microorganisms were discovered in a Great White Shark that perished due to multiple organ failure. Other sharks off the west coast have died from unknown pathogens and shared brain infections across species. Could this possibly have anything to do with the plumes of radiation from the Fukushima meltdown that have been detected on Oregon’s shores? According to this broadcast of the TRT World program called Insight, it will take 100 years for a clean up of the radiation, if indeed there can even be a clean up at all. Perhaps the question will eventually be, will any sea life survive?

Find more news coverage of the unexplained at Unexplained.news.