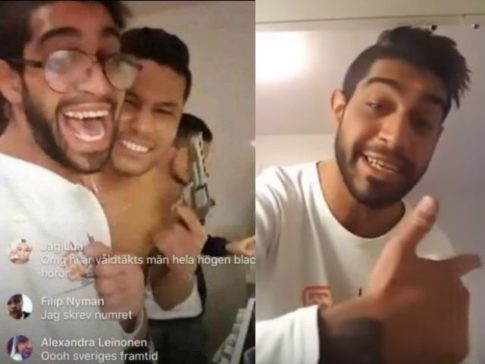 Two asylum seekers who are on trial for raping a Swedish girl and streaming the ordeal live on Facebook will not face deportation back to their home countries.

The asylum seekers directly involved in the rape, aged 18 and 21, will not face deportation after the prosecution withdrew their previous claim. “The prosecutor has taken a wise decision. It is against the Aliens Act, which I pointed out here before,” said lawyer Stefan Wallin who is defending one of the men accused of the rape, 24 Uppsala reports.

Mr. Wallin, who represents the 21-year-old Afghan national, said he and his 18-year-old co-defendant arrived in Sweden when they were under the age of 15.

The third defendant in the case, a 25-year-old Iranian immigrant with Swedish citizenship, is also being tried as he is accused of filming the incident and not reporting it to the police. He also faces a charge of defamation as he broadcast the rape on Facebook. However, due to him holding Swedish citizenship, he cannot be deported.

Tuesday marked the end of the trial which began several weeks ago in March. Unlike several other cases, this has seen a speedy trial as the incident only took place in January of this year.

Prosecutor Pontus Melander said he was confident he would achieve a guilty verdict. “We have an incredibly good evidence in the form of film material, but it is always up to the district court,” he said.

Melander said the likely punishment for the two involved in the attack would be three years in prison, while the 25-year-old who filmed it could receive a one-year sentence. The prosecution argued the sentence for slander should be at least one year due to the fact the video was spread widely on social media and the victim would have to live with it for the rest of her life.

The defence has claimed the act was consensual and the Afghan’s lawyer said he had evidence the woman participated in the incident on her own accord.

Two weeks ago, just after the trial began, police in Uppsala reported there had been another similar rape incident that was filmed and posted to social media. The sex attack was broadcast on the social media app Snapchat and so far one man has been arrested and his mobile phone confiscated, though police suspect at least two more men having been involved.