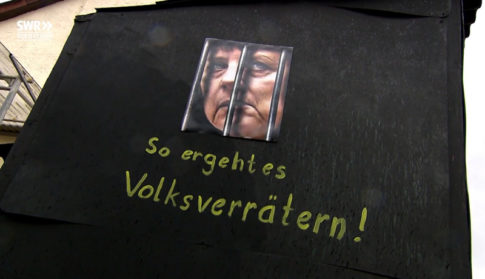 The Carnival parade float from Bad Bergzabern, Germany, that triggered an investigation by the police and State Attorney, showing Chancellor Angela Merkel behind prison bars, with the caption: “This is how traitors end up.” (Image source: SWF video screenshot)

– Germany’s Jihad On Freedom Of Speech:

Via Jijeta Uniyal of The Gatestone Institute,

Carnival in Germany is a time for some light-hearted fun, fancy costumes and political satire. This year, many German cities held traditional float parades on Rosenmontag, or Rose Monday, many of which depicted political themes. Images of U.S. President Donald Trump took centre stage in many float processions, in some instances with his decapitated head held up high by the Statue of Liberty, in the style of an ISIS beheading.

Other floats went after nationalist European leaders and right-wing parties. In Düsseldorf, President Trump was shown standing next to a blond Hitler, joined by France’s Marine Le Pen, and the Netherlands’ Geert Wilders.

To those objecting to some of these violent depictions of President Trump, prominent German journalist Christian Thiels reminded the public that, “It’s called ‘freedom of satire’. You don’t have to like it or find it tasteful but it is part of free speech.”

In this very spirit of “freedom”, some residents of the sleepy German town of Bad Bergzabern thought they could mock Chancellor Angela Merkel and her refugee policy.

A local non-political group showed up with a float showing Chancellor Merkel behind prison bars, with the caption: “This is how traitors end up.” It is German equivalent of the popular U.S election slogan used by many Trump supporters for former U.S. presidential candidate Hillary Clinton: “Lock her up.”

A police complaint was filed the following day. The day after that, police rolled into action, and the State Attorney of Landau district opened an investigation against the subversive “miscreants.”

Germany’s police and legal systems, which took weeks to prosecute anyone in the city of Cologne in the wake of the New Year’s Eve mass sexual assaults, and then closed most of the cases after a year-long investigation, immediately swung into action against a group of small-town revellers.

“The float showed the head of the Chancellor behind the prison bars. According to a police statement, by Tuesday many residents had complained about the float and a case had been filed. The State Attorney’s office in Landau is examining if the depiction of the Chancellor is a punishable offense.”

“The float was registered by a private group from South-Palatinate Kapellen-Drusweiler. The office-holders of the group told SWR that they do not belong to any right-wing group, and only wanted it to be a thought-provoking exercise.”

Before German law enforcement could make any assessments, the mayor’s office of Bad Bergzabern issued a statement that from now on, all Carnival floats were first to apply for mayoral approval.

Meanwhile, in January 2017, the regional court of Wuppertal acquitted Arab arsonists guilty of setting fire to a local synagogue in 2104, declaring it a legitimate political protest to draw “attention to the Gaza conflict” with Israel, and “deemed the attack not to be motivated by antisemitism.”

In Merkel’s Germany, you are allowed to walk free after setting fire to a synagogue, but not after mocking the Chancellor’s “sacred” refugee policy.

While German police are busy raiding homes across the country, targeting citizens who make “hateful” or “offensive” Facebook postings, mosques in Germany are openly preaching anti-Semitism and ISIS-style jihadism.

Merkel’s Germany is policing Carnival floats and Facebook posts, when it might better spend its time and taxpayer money securing the borders and cracking down on recruitment to jihad.