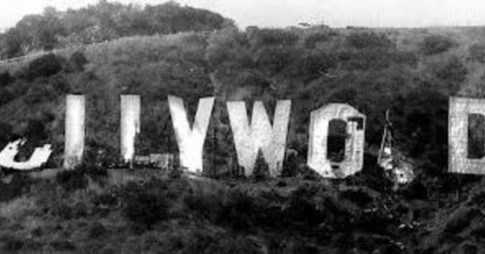 – Pedowood: The Hollywood Complex At The Heart Of A Celebrity Child Sex Ring:

An exclusive report from Disobedient Media reveals shocking facts indicating that one of Hollywood’s most prestigious and well known child acting schools appears to be a haven for child sex abusers, criminal activity, and the location of multiple celebrity deaths related to drug abuse.

I. What Is The Oakwood Child Actor Program

The Oakwood Apartments child actor program (apartments now known as Avalon Toluca Hills) is famously labeled Hollywood’s “Harvard” for child actors seeking to enter the industry. It is described as a halfway house for children attempting to break into the Hollywood scene. It was featured in the 2010 documentary The Hollywood Complex, a clip of which can be seen here.

On April 15th, 2015, Hollywood news source Deadwood revealed that two registered sex offenders convicted of crimes against minors had been living at the Oakwood Apartments. The startling discovery was unearthed in the aftermath of another investigation the publication had been conducting into the case of two con men who had both impersonated a retired acting teacher to gain access to children acting in low-budget movies and student film projects. Oakwood claimed to have not known about the sex offender status of one of the residents, and stated that they evicted the second tenant when they discovered his history of child abuse.

At least one resident of the Oakwood Apartment Complex was tied financially to the DEN child sex scandal which erupted in Hollywood in the aftermath of the dot-com burst. Actor Fred Savage is listed by multiple media outlets as having lived in the complex during his younger years. As reported yesterday by Disobedient Media, Savage was financially tied to DEN, though he was never accused of any sex offenses against minors.

Rudimentary research into the Oakwood Apartment Complex unearths concerning details about the establishment’s environment. A quick reference of Yelp reviews left about Oakwood indicate that it is in reality dilapidated, overrun with drug users and purportedly rife with fire hazards. One user labels the complex a “disaster waiting to happen” while another more bluntly advises “run away fast and never look back.” The north side of the complex designated for child actors and their families appears to be abandoned by Oakwood staff. Hardly an appropriate venue for a business catering to young children.

The complex also appeared in the news this week during a strange episode where Oakwood tenant Laura Lynn Stacey disappeared on January 22nd from her apartment, sparking a manhunt in the Los Angeles area. After driving north and abandoning her phone and car in different locations, Stacey was found walking along the California 14 Freeway. She was confused and suffering from exposure to cold in heavy rain that was affected the Los Angeles area. The circumstances of her mysterious disappearance remain unclear.

A private investigation into Oakwood’s compound and its employees does nothing but reinforce the notion that it is an utterly inappropriate venue for children. On January 23rd, 2017, a private citizen entered the public spaces of the compound at Oakwood and posted photos of the interior to online message board 4chan. He confirmed Yelp reports that the northern compound appeared to be mainly abandoned by Oakwood staff. A number of the photos show imagery openly posted around the buildings at Oakwood which make direct reference to pedophilia. Visible near elevators and the apartment’s mailboxes are “Community Information” flyers depicting Pedobear, a well known internet meme which is used to reference pedophilia and child abuse. 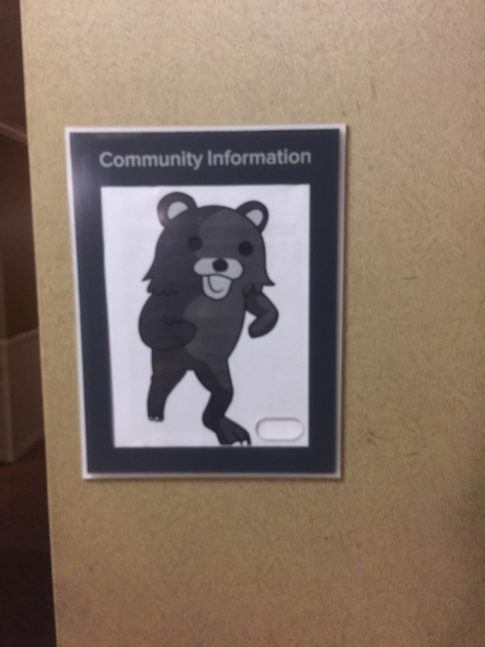 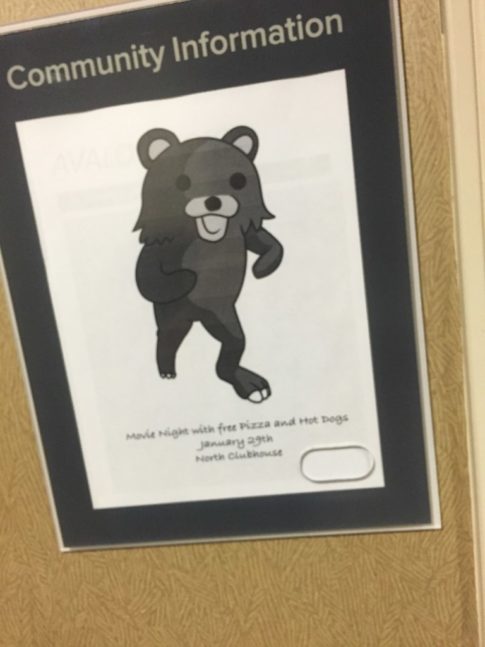 One of the flyers bore the caption “Movie Night with free Pizza and Hot Dogs” due to take place on January 29th in the abandoned and generally neglected North Clubhouse of Oakwood. The use of the term “Pizza and Hot Dogs” is interesting. Online users have been speculating for months that the phrase is used as some kind of code after it appeared in the Wikileaks Global Intelligence Files. In the email, members of the intelligence company Stratfor discussed “pizza and hot dogs” which were apparently being flown in from Chicago by President Barack Obama at a cost of $65,000 to taxpayers. What exactly the term “Pizza and Hot Dogs” actually represents has not been definitively proven.

A close up of the phrase on the flyer may be seen below. An archive of the photos taken by the individual who visited the Oakwood Apartment Complex, as well as commentary they added to each photo at the time of posting can be found here and here. 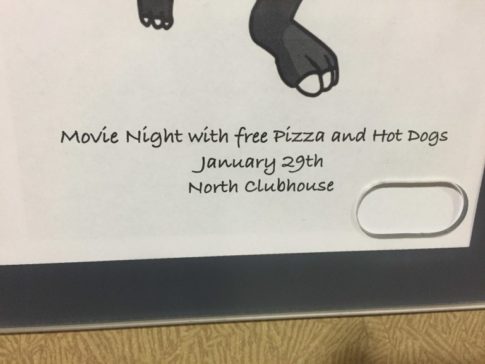 Additional investigation showed that at least one employee listed on Oakwood’s acting school website has a history of posting sexually inappropriate content to social media given their position in a child-oriented business. Oakwood Toluca Hills Front Desk employee Janet Julinek was allegedly found to be posting a large number of sexually explicit images to a social media account she appears to run on Facebook. The images, a number of which may be found archived here, included references to Jeffery Dahmer and disgraced Hollywood persona Bill Cosby.

The social media posts, strange incidents involving other adult residents and sexually suggestive imagery found on open display around Oakwood’s compound raise questions about the thoroughness with which Oakwood vets employees and residents in the complex, especially after the revelation that child sex offenders were allowed to live on the grounds in proximity to children.

III. Oakwood Has Been The Scene of Multiple Drug Related Celebrity Deaths and Gang Violence

A number of Hollywood celebrities have been found deceased in the Oakwood complex amid suspicions that drug overdoses were the cause of death. On March 10, 2010 Actor Corey Haim was living at the Oakwood Apartments when he was found there dead of a suspected overdose. Vicodin, Valium and muscle relaxant were found in his apartment, prescribed to him just days before. In the past Haim had admitted to taking up to 85 Valium a day. His autopsy listed pneumonia as the official cause of Haim’s death.

Singer Rick James was also found dead in his apartment at Oakwood on August 9th, 2004. An autopsy found nine different drugs, primarily methamphetamine and cocaine, in his system. James also had a known history of drug abuse, primarily crack cocaine. The autopsy ultimately listed his cause of death as being “an enlarged heart.”

Oakwood Toluca Hills has also been the scene of recent gang violence. On November 29th, 2016, a man’s body was found in the parking building of Oakwood’s apartment complex. Sources at the Los Angeles Police Department told CBS Los Angeles that the deceased had been a member of an Armenian criminal gang and was apparently executed. The main Armenian street gang in Los Angeles is known as “Armenian Power” or West Side AP XIII and is known for engaging in kidnapping, racketeering, extortion and robbery. Curiously, in 2014 one of their members appeared in Syria alongside a member of LA Hispanic street gang Puro Sur 13 purportedly fighting for the Syrian government and Hezbollah. The violent gang activity around Oakwood’s apartments does not reinforce its image as a friendly location for a world-famous child acting school.

The troubling signs uncovered and compiled by Disobedient Media that the Oakwood Apartment Complex and child acting school are in fact a potential safe haven for child predators and criminal activity raise questions about what has been historically occurring at the school. Given that the information uncovered in this report is fairly common knowledge in the Los Angeles entertainment industry, it also raises questions about the pervasiveness of this predatory culture in Hollywood. More broadly, it begs the question of why the mainstream media so vigorously attacked citizen led investigations into child trafficking during the months of November and December 2016 which were derisively labeled “Pizzagate” and dismissed as baseless. In many cases, the media’s attacks have been proven to be based on false evidence and arguments intended to distract from the facts which surfaced during research.

This is a developing story and will be updated as more facts emerge.

1 thought on “Pedowood: The Hollywood Complex At The Heart Of A Celebrity Child Sex Ring”