– War On Cash Escalates: Australia Proposes Ban on $100 Bill; No Cash Within 10 Years?:

Global financial has picked up steam. Australian citizens are likely the next victim. 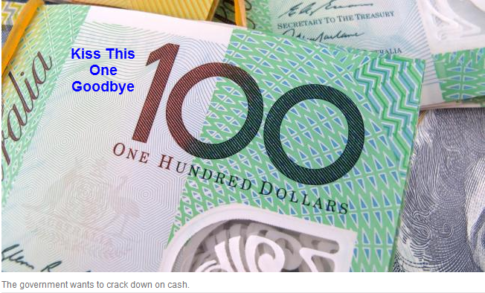 Australia looks set to follow in the footsteps of Venezuela and India by abolishing the country’s highest-denomination banknote in a bid to crack down on the “black economy”.

Speaking to ABC radio on Wednesday, Revenue and Financial Services Minister Kelly O’Dwyer flagged a review of the $100 note and cash payments over certain limits as the government looks to recoup billions in unpaid tax.

“The whole point of this crackdown on the black economy is to make sure we close down any potential loopholes,” she said. Despite the broad use of electronic forms of payment, Ms O’Dwyer warned there are three times as many $100 notes in circulation than $5 notes.

“From the banks’ perspective there would likely be a spike in deposits — if all the $100 notes were deposited into banks (ignoring hoarded $50 notes), household deposits would rise around four per cent,” the report said.

Financial Services Minister Kelly O’Dwyer notes there are currently 300 million $100 notes in circulation, and 92 per cent of all currency by value is in $50 and $100 notes.

It would behoove O’Dwyer to think. People can have 100 pennies in their pocket (each of which is nearly worthless) or they can hold a dollar.

Similarly, people can hold a stack of ten $10 notes in their wallet or they can hold a $100 note.

Mathematically it makes perfect sense that 92 per cent of all currency by value is in $50 and $100 notes.

What the hell does $1 buy these days? Is someone going to carry a wad of fifty $1 notes to go to a movie and buy popcorn?

No Cash Within 10 Years?

Rest assured this will not stop with $100 notes. There will no cash within ten years.

5 thoughts on “War On Cash Escalates: Australia Proposes Ban On $100 Bill; No Cash Within 10 Years?”