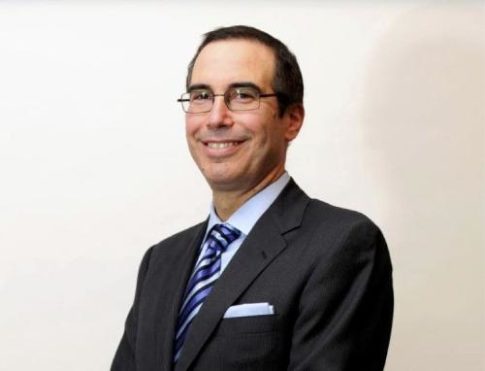 Back on November 3, when it still seemed improbable to most that Trump would win the election, a trial balloon was floated by Reuters, according to which Trump campaign manager, former Goldman Sachs partner and Soros Fund management employee, was being groomed for something much larger as Donald Trump reportedly told his aides today that he wants Mnuchin to serve as his Treasury Secretary.

Fast forward to today when Trump is now president-elect, and when Bloomberg reported moments ago that the trial balloon apparently worked without much push back, and the same Steven Mnuchin has been recommended by Donald Trump’s transition team for Treasury secretary, “according to people familiar with the recommendation.”

Bloomberg adds that Mnuchin, the campaign’s national finance chairman, has been considered the leading candidate for the job. Trump has already displayed a pattern of loyalty to those closest to him during the campaign in early selections for administration jobs, and Mnuchin joined the campaign at a time when many from Wall Street stayed away.

Mnuchin, CEO and co-founder of Dune Capital Management LP, was spotted at Trump Tower Monday. He did not immediately respond to messages left on his mobile phone for a request for comment.

Could it be yet another trial balloon? Sure: Trump said not to have made final decision on position yet. Recall that other names being floated have included Jamie Dimon, and Jeb Hensaerling. There is even a petition to make Ron Paul Trump’s Secretary of Treasury.

However, absent some major change, at this point it does indeed appear that Mnuchin is the frontrunner for this most coveted position in Trump’s campaign. Expect Trump to make a decision on the matter in very short notice.

But wait, there’smore: as Bloomberg also reports, Steve Cohen’s – as in the same Steve Cohen who was barred for years of illegal insider trading – general counsel Is also part of the Trump transition team.

Should Mnuchin get the nod, it will certainly elevate his former employer, Goldman Sachs, to its traditional level of being pari passu with the US executive and legislative branch when it comes to decisionmaking. It also would mean that the swamp may be about to get a whole lot deeper.