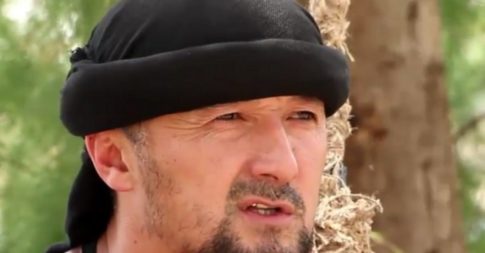 The Islamic State of Iraq and the Levant, also known as ISIS, has been known to use weapons and vehicles their militants have seized from rebel forces backed by the United States. But many have also speculated that in the past, members of the terrorist group were trained or provided with weapons by the U.S. government — either directly or indirectly. Now, the rumors have finally been put to rest in a more formal fashion.

On Tuesday, the U.S. State Department announced it would offer a reward of up to $3 million for any information that could lead officials to Gulmurod Khalimov, a former Tajik special operations colonel who, before joining ISIS, received training from the United States through the State Department’s antiterrorism assistance program.

While in its latest statement the U.S. government did not readily admit Khalimov had been trained by its forces, Reutersreports that the former special operations colonel attended “five U.S.-funded courses in the United States and Tajikistan between 2003 and 2014.”

The official statement described the militant as one of the Islamic State’s “key leaders,” adding “[h]e was the commander of a police special operations unit in the Ministry of Interior of Tajikistan. He is now an ISIL member and recruiter.”

Reports of his decision to join ISIS appear to come from a 10-minute propaganda video from May of 2015, in which “he announced … that he fights for [ISIS] and has called publicly for violent acts against the United States, Russia, and Tajikistan.” Through the State Department’s “Rewards for Justice” program, officials hope to find information that will lead them to the militant — the same strategy the State Department used when looking for Osama bin Laden and former Iraqi dictator Saddam Hussein.

Reutersreports that to U.S. officials, Khalimov is considered a “threat to national security and the U.S. Department of State due to his prior counter-terrorism experience and training.”

Back in 2015, the Washington Postreported that Khalimov “received training from elite instructors in Russia as well as in the United States.”

In the video, in which he unveils himself as an ISIS leader, he says:

“Listen, you American pigs, I’ve been three times to America, and I saw how you train fighters to kill Muslims. … God willing, I will come with this weapon to your cities, your homes, and we will kill you.”

Tajikistan, one of the poorest post-Soviet nations, crushed Islamic insurgencies with the help of the Russian government in a civil war that spanned from 1992 to 1997. In his 2015 video, Khalimov also attacks the Tajik president, Imomali Rakhmon, whose government has been harshly criticized “by rights groups for everything from forced beard shavings to numerous convictions of believers on religious extremism grounds.”

It is interesting that Khalimov fled to a group like ISIS, where members and subjects are also forced to bow before the group’s leadership in a way very similar to Rakhmon’s alleged treatment of the Tajik people.