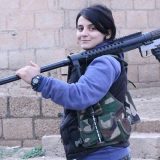 – The US Just Abandoned Our Only Reliable Ally in Fight Against ISIS:

Pro-Kurdish fighters claim US, Syria, Turkey and Iran are collaborating to undermine them, after having served US as shock troops against ISIS

(MEE) Syria — The Kurdish YPG militia counted the US among its most trusted allies as it fought the Islamic State (ISIS) group in northern Syria. But that all changed on Wednesday. Turkey’s invasion of the border town of Jarabulus, combined with a US warning the YPG will lose its support unless it withdraws from nearby areas, has left the Kurds feeling abandoned.

The YPG on Thursday heeded the US order it must not control areas west of the Euphrates river, and has withdrawn some forces from the front lines around Jarabulus and Manbij, a town it took from ISIS earlier this month.

But Kurds have taken the US statements to be proof of a collaboration with Turkey to undermine their goal of creating a contiguous confederation in northern Syria, after they have served their purpose as shock troops against ISIS.

Erwin Stran, a US volunteer with the YPG, said the US statement was a stab in the back.

“I guess it’s true what they say. ‘Kurds have no friends but the mountains’,” he told Middle East Eye. “I’m just as confused as I’m sure the Kurds are at this point.”

The Syrian Kurds see the recent Turkish incursion in northern Syria – which Turkey said was primarily aimed at driving ISIS from the border town of Jarabulus – as a means of preventing the creation of a united federal Kurdish region on its border by connecting their two canton administrations by capturing the ISIS-held border strip.

The YPG have accused Turkey of supporting ISIS while the YPG-linked Syrian Democratic Forces (SDF) were fighting the group in Manbij, and allege that hundreds of foreigners continued to enter Syria through the Turkish border during the fighting. 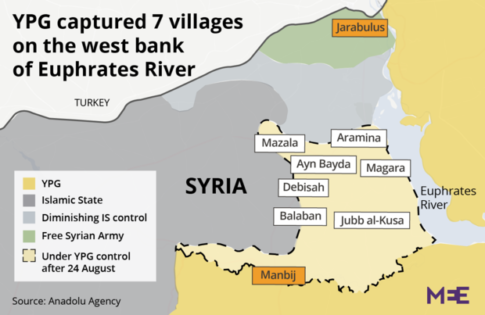 Initially, the SDF were planning to move on towards Jarabulus and al-Bab with two newly established military councils to open a corridor towards Efrin, and to unite their three local administrations into one federal semi-government, bordering Turkey. But now this looks increasingly difficult.

“It’s disgusting and disappointing,” said Joe Ackerman, a former British soldier from Halifax who fought for more than a year with the Kurds against ISIS until March 2016.

“It looks like a big plan from Turkey to be fair. And if Turkey are there to defeat Daesh (IS) then why are the soldiers invading mainly terrorist groups,” he added, referring to the Turkey-backed rebel groups who reportedly led the offensive on Jarabulus on Wednesday.

“The YPG, YPJ (Women’s Protection Units) and the SDF have lost considerable amounts of soldiers [in Manbij] and without them the West and Europe would be awash with trained Daesh experts in bomb making and skilled soldiers.”

YPG officials have claimed that a number of otherwise hostile states collaborated to launch the operation in northern Syria, with the longer term goal of undermining the ability of the YPG to build their confederation in the region.

Salih Muslim, the co-chair of the YPG’s political wing the Democratic Union Party (PYD) warned MEE in early August that Turkey “might make an agreement with Israel, Russia, Iran, or even Assad in the future, just to not let the Kurds have their rights.”

A source close to the Iranian leadership also told MEE on Thursday that the “Turks and Syrians are co-ordinating through the Iranians.”

Recent clashes between the Syrian government and the YPG in Hasakah — which involved the first use of Syrian air strikes against Kurdish targets since the beginning of the war — have indicated that the cold, but often tacitly cooperative relationship between the YPG and the government, may have broken down.

The government’s harsh reaction to the YPG declaration of a “Federation of Northern Syria” in March, also indicates Damascus’s concern about the growing strength of the group.

Last week, the local administration in Kobane warned that the attacks on Hasakah had been coordinated with Turkey “in order to confront the democratic project that is being shaped in northern Syria” and said the government was trying to “create sectarian strife among the Syrian groups.”

Now, with US Vice President Joe Biden reprimanding the YPG during a joint press conference with Turkish Prime Minister Binali Yildirim, many have expressed concern that the Kurds could be left without a close ally in the region.

“The disappointment of Kurds towards [the] US is very visible, you can see from people on the streets, politicians, it’s there, people are very upset and disappointed,” said Mutlu Civiroglu, a Kurdish affairs analyst and reporter. “Because it is the Kurds who paid the highest price in the fight against IS.”

“Just during the Manbij operation [the SDF] had more than 200 losses, so families of these fighters are upset, people on the street are upset that the US is so inconsiderate to their demands,” he said. “And at the same time making Turkey happy.”

Nawaf Xelil, a former official of the Democratic Union Party (PYD), and a Kurdish analyst, however, said that Biden had said nothing new and that the YPG already withdrew two weeks ago after Manbij was liberated in mid-August, in a statement backed up by the US-led coalition spokesman Colonel John Dorrian, who said the forces were preparing to liberate the ISIS stronghold of Raqqa.

“We know that that United States follow their interests [as a state],” said Xelil. “If they call us on to liberate northern Raqqa, we as Kurds will not be very upset. For us it’s also very important for Rojava, but it’s also important for us to unite Efrin and Kobani,” he said.

“We will not say okay to everything that the US says, but the Kurds and Americans understand each other’s role within the coalition,” he added.

The US has said that it will continue its support for the YPG despite Turkish opposition to the YPG and the SDF forces.

“Well, I would dispute views that they [Kurds ] feel that they’re being abandoned. We have been very clear on our support,” US State Department spokeswoman Elizabeth Trudeau said on Wednesday.

“These have been tremendous fighters against our common enemy, which is Daesh, on this.”

“As I’ve said, we remain in close contact with both the Turks as well as local Kurdish commanders on this.”

But the SDF forces say the operation to take Jarabulus that only took a few hours is suspicious.

“There was an agreement between Turkey and IS — no soldier got injured, there were no IS suicide attacks,” SDF adviser Nasir Haji Mansour told MEE.

On Monday, there were already small clashes between the Syrian Democratic Fighters (SDF) and Turkish-backed rebels 7km from Azaz, and the Kurds accused Turkey of firing at YPG positions near the town of Derik, also known as Malikiye, a few kilometres from the Turkish and Iraqi border.

Idris Nassan, former foreign affairs minister for the YPG-controlled city of Kobane, said the Turkish incursion could lead to clashes between the two US-allies: Turkish-backed rebels and Kurds.

“There are already fights [between Turkish-backed rebels] and Kurds in many places, in Aleppo and Azaz, because they have different projects [the Kurds and Turkish-backed opposition],” he said.

“So there will be more conflict around the border strip from Jarabulus to Azaz, and maybe even further.”