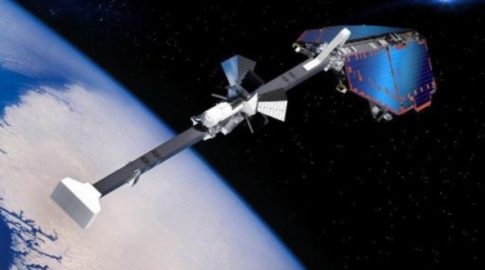 QUESS could hold the key to uncrackable communications

In the age of relentless cyberattacks and global electronic surveillance, nations and citizens are looking for any means to secure their communications. China is poised to launch a project that may provide the path to an uncrackable communications system, by turning messages quantum and taking them into space. The new Quantum Space Satellite (QUESS) program is no mere science experiment. China is already becoming a world leader in quantum communications technology; a satellite that delivers quantum communications will be a cornerstone for translating cutting-edge research into a strategic asset for Chinese power worldwide.

Cryptography operates through the use of an encryption key (such as a numbers pad), which, when applied to an encryption algorithm, can be used to decrypt or encrypt a message. Quantum entanglement is the act of fusing two or more particles into complementary “quantum states.” In such states, no particle can be independently described, instead the particles exist in a hazy shared quantum state that “collapses” when observed. Quantum encryption thus takes advantage of this feature, using it to detect would-be eavesdroppers, whose presence causes quantum states to collapse and reveal their spying to legitimate parties. Additionally, the complexity of quantum mechanics makes it virtually impossible to reverse engineer the quantum key generated through quantum entanglement.

Quantum keys are thus theoretically impossible to crack by even quantum computing — a theoretical form of supercomputing that promises to defeat traditional forms of encryption. (It is important to note, however, that all is not perfectly secure. Quantum secured communications, like other forms of encryption, are vulnerable to denial of service, physically tampering of the quantum communications device, human failures in operational security and impersonation of sender).

The Quantum Space Satellite, aka Quantum Experiments at Space Scale (QUESS), will seek to turn this theory into reality. It will be launched in July 2016. Chief scientist Pan Jianwei remarks that QUESS will complete China’s growing quantum communications network, which includes a 2,000-kilometer-long network between Beijing and Shanghai.

QUESS’s function is to test the phenomena of quantum entanglement. Operated by the China Academy of Sciences, this 500kg satellite contains a quantum key communicator, quantum entanglement emitter, entanglement source, processing unit, and a laser communicator. QUESS will relay transmissions between two ground stations (one in China, and the other in Europe) transmitting quantum keys. Pan remarked that the distances involved (the QUESS orbits at an altitude of 1,000km) is ideal for testing quantum teleportation of photons. Additionally, the Austrian Academy of Sciences will provide the optical receivers for the European ground stations.

In addition to its own efforts, Chinese scientists are teaming up with their European counterparts on other quantum technologies such as photon teleportation, transmission error reduction and random number generators. If QUESS is successful, China will build an Asian-European quantum key distribution network by 2020, to be followed by a global quantum communications network in 2030.

QUESS is one of the National Space Science Center’s “Strategic Priority Programs,” which include scientific projects that look at black holes, dark matter, and cosmic background radiation. The program marks a significant shift in Chinese space programs, which have largely focused on human and robotic space exploration rather than space science. But there is no doubt of its security intent. Pan noted that the unbreakable security of quantum cryptography would be vital to any Chinese regional warfighting capabilities.

QUESS fits into a broader series of experimental quantum encryption programs which may be intended to address concerns over China’s information security, particularly in the post Snowden era. Government, military, and financial networks are juicy targets for espionage, and quantum encryption promises to provide a level of potentially unbreakable encryption for these systems, as well as a sure-fire method to detect any attempts at intrusion.