Syria’s Foreign Ministry, which has the backing of Russia and as of last week, China, condemned Turkey’s military incursion against an Islamic State-held Syrian town near its border, aided by aircraft from a U.S.-led coalition, as a breach of its sovereignty, Syrian state television reported. It added that any counter terrorism operations inside its borders had to be conducted in coordination with Damascus and accused Ankara of launching the incursion to replace Islamic State with “other terrorist groups” a reference to rebels.

There has already been speculation that Turkey’s latest incursion into Syrian territory has little to do with the stated purpose of cleansing ISIS forces close to its border following this weekend’s Gaziantep suicide bombing which was promptly blamed on ISIS, and is merely the latest escalation in Erdogan’s ongoing conflict with militant Kurdish forces located in the region.

As reported earlier, Turkish special forces, tanks and jets backed by planes from the U.S.-led coalition launched their first co-ordinated offensive into Syria on Wednesday to try to drive Islamic State from the border and prevent further gains by Kurdish militia fighters. Turkish tank units and Syrian rebels backed by the NATO member crossed into northern Syria to push Islamic State out of the border town of Jarablus, military sources said.

“Euphrates Shield”, named after the river running nearby, is Turkey’s first major military operation since the abortive coup. It was the first time warplanes from Turkey have struck in Syria since November, when Turkey downed a Russian warplane near the border, and the first significant incursion by Turkish special forces since a brief operation to relocate the tomb of Suleyman Shah, a revered Ottoman figure, in February 2015. The operation comes four days after a suicide bomber suspected of links to the group killed 54 people at a wedding in the southeastern city of Gaziantep.

Turkey’s President Tayyip Erdogan said the operation was targeting Islamic State and the Kurdish PYD party, whose gains in northern Syria have alarmed Turkey. Ankara views the PYD as an extension of Kurdish militants fighting an insurgency on its own soil, putting it at odds with Washington, which sees the group as an ally in the fight against Islamic State.

Kurdish fighters have captured large areas of territory since the start of the Syrian conflict in 2011, and Ankara has long declared the Euphrates river, which runs just east of Jarablus, a red line which it does not want them to cross. Foreign Minister Mevlut Cavusoglu said Kurdish fighters must return east of the Euphrates or Turkey would “do what is necessary”.

According to Reuters, Turkey and the United States hope that by removing Islamic State from the border, they can deprive it of a smuggling route which long saw its ranks swollen with foreign fighters and its coffers boosted by illicit trade. Which, of course, is ironic since for over a year Turkey was allegedly the main provider of financial support for ISIS in exchange for the Islamic State’s oil “exports.”

White and gray plumes of smoke rose from the rolling hills around Jarablus, visible from the Turkish town of Karkamis across the border. The boom of artillery rounds was audible as advancing Turkish tanks opened fire.

Turkish military sources said the air strikes had hit 12 Islamic State targets, while artillery fire hit 70 targets. “The aim of the operation is to ensure border security and Syria’s territorial integrity while supporting the U.S.-led coalition against Islamic State,” one military source said, adding work to open a passage for ground forces was under way.

Erdogan said Turkey was determined that Syria should retain its territorial integrity and would take matters into its own hands if required to ensure that was the case.

But Saleh Muslim, head of the Kurdish PYD, wrote in a tweet that Turkey was entering a “quagmire” in Syria and faced defeat there like Islamic State. Considering historical anecdotes about “land wars” in Asia, he may have a point.

Coincidentally, the invasion takes place just as U.S. Vice President Joe Biden has arrived in Turkey hours after operations began on a pre-planned trip, the most senior U.S. official to visit since a failed July 15 coup shook confidence in Turkey’s ability to step up the fight against Islamic State. 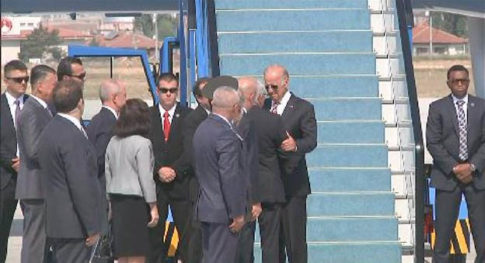 Biden – whose visit has been panned by some as an attempt at appeasement of the Turkish ruler – is likely to repeat U.S. concerns about Turkey’s crackdown on free speech and political opponents, while Turkish President Recep Tayyip Erdogan is sure to repeat demands that the United States extradite a Muslim cleric living in Pennsylvania who Erdogan claims masterminded the failed military coup. Fethullah Gulen, 75, has denied any involvement with the July 15 coup attempt. State Department deputy spokesman Mark Toner announced Tuesday that Turkey formally submitted an extradition request for the cleric. Toner said the request doesn’t relate to the recent coup attempt, but he declined to provide further details.  “We are considering the merits of the request,” Toner said.

A senior administration official traveling with Biden said the United States wanted to help Turkey to get Islamic State away from the border, and was providing air cover and “synching up” with the Turks on their plans for Jarablus. He also appears to have lied, when he said the shelling was hitting Islamic State, not Kurdish forces.

Biden, while in Ankara, will emphasize Washington’s “ongoing strong support” of Turkey, the White House said this week. He also will meet with Prime Minister Binali Yildirim.

However, in the latest sign of strains between the two countries, Turkish news media reported that Erdogan plans to visit Iran on Wednesday, possibly to forge new ties. The trip follows Erdogan’s visit to Moscow this month to improve relations.

Furthermore, today’s invasion has noticeably complicated Ankara’s relations with Washington, political analyst Bulent Aliriza told Radio Sputnik. “After the suicide attack in Gaziantep the Turkish government said that they will no longer tolerate the presence of Daesh on the border,” the director of the Turkey Project at the Center for Strategic and International Studies in Washington, DC said.

“Clearly President Erdogan is sending a message by getting closer to Russia and Iran that he’s unhappy with the attitude of the West,” Bulent Aliriza, a Turkey analyst at the Center for Strategic and International Studies, told the Associated Press. “Turkey’s still going to remain a NATO member and aspire for EU membership, but the atmosphere is worse” than before the coup.

“If Turkish artillery hit Manbij, it was hitting mostly Kurdish elements. So it hit both Daesh and the YPG. This of course created massive complications in Turkey’s relationship with the US because the US has been backing the YPG against Daesh,” the analyst said.

“Washington’s hope was that after the capture of Manbij, the SDF would move to the town of al-Bab, which is further west, 20-30 kilometers away from the Turkish border and ultimately that these forces would move to Raqqa,” the capital of Daesh’s caliphate, he added.

Meanwhile, as CBS correspondent Mark Knoller writes on Twitter, “Sr US Official says there are strains in the US/Turkey relationship but denies it’s on the brink of a rupture” and adds that “Sr official says @VP objective in Turkey is to make sure US-Turkey relations remain rock solid… says US can’t afford any friction in relations with Turkey. Cites importance of Turkish role against ISIS in Syria.”

The biggest friction between the two countries remains over the extradition of Gulen: “Biden to stress to Erdogan that US taking seriously s request for extradition of cleric Fethullah Gulen. DOJ lawyers pouring over evidence. But official says Turkey wouldn’t be satisfied unless Gulen had been brought over with Biden on Air Force Two.”

Finally, in a separate meeting, Russian Foreign Minister Sergei Lavrov and U.S. Secretary of State John Kerry will hold talks in Geneva on Friday focusing on the conflicts in Syria and Ukraine, Reuters reported. The two men also discussed Syria by phone on Wednesday, the Russian foreign ministry said in a statement.

U.S. and Russian officials, whose countries back opposite sides in the five-year Syrian war, have been meeting to agree on military cooperation in the fight against their common enemy there, the Islamic State militant group.  Kerry said earlier this week the talks were nearing an end, with technical teams still meeting to discuss details. Earlier, a U.S. official said that Kerry, who was in Abuja, Nigeria, would meet Lavrov in Geneva on Aug. 26 to discuss the conflict in Syria and the Ukraine crisis.

The Russian foreign ministry said the two men discussed Syria on Wednesday, “including the situation around Aleppo where the (Syrian) government forces, with the support of the Russian military, have been carrying a humanitarian operation.”

No progress has been reported on a 48-hour humanitarian pause sought by the United Nations in Aleppo to allow aid deliveries and evacuation of wounded from the divided city of 2 million that lacks food and water.

Russia also said that the two ministers had talked about the need to separate “Washington-oriented” Syrian opposition groups from the “terrorist groups” that are not covered by a regularly broken ceasefire.

It was unclear how today’s unexpected military campaign by Turkey in Syria targeting the very group, YPG, that the US has been allegedly protecting from ISIS attacks, would impact the ongong peace talk impasse.