– State Department Urges US Citizens To Leave Gaza “As Soon As Possible”:

It’s been a busy 24 hours for John Kerry. Between fending off requests for Hillary’s emails, palling it up with Erdogan, and dealing with Afghanistan fallout, The Department of State has just issued a travel alert warning U.S. citizens against all travel to the Gaza Strip and urges those present to depart as soon as possible when border crossings are open. The announcement follows an escalation between Palestinian militants and the Israeli military over the weekend.

The security situation remains complex in Israel and the West Bank, and can change quickly depending on the political environment, recent events, and geographic location. U.S. citizens should exercise caution and remain aware of their surroundings when traveling to areas where there are heightened tensions and security risks. The Government of Israel and the Palestinian Authority both make considerable efforts to police major tourist attractions and ensure security, particularly in areas where foreigners frequently travel. This replaces the Travel Warning issued December 15, 2015.

Gaza is under the control of Hamas, a foreign terrorist organization. The security environment within Gaza and on its borders is dangerous and volatile. Violent demonstrations and shootings occur on a frequent basis and the collateral risks are high. While Israel and Hamas continue to observe the temporary cease-fire that ended the Gaza conflict in 2014, sporadic mortar or rocket fire and corresponding Israeli military response continue to occur.

Within Israel and the West Bank, a rise in political and religious tension beginning in October 2015 led to a spike in violence in which U.S. citizens were killed and wounded. There is no indication that U.S. citizens were specifically targeted based on nationality. Perceived religious affiliation was a factor in some of the attacks.  Attacks were carried out using knives, vehicles, and guns. Israeli security forces reacted with deadly force, which resulted in some bystanders being injured or killed in the crossfire. While the frequency of attacks has abated significantly since April 2016, the possibility of random violence continues to exist and can happen without warning. U.S. citizens should stay abreast of current events and know what areas to avoid when traveling throughout the region.

For your safety, the Department of State recommends that U.S. citizens:

When planning their own travel, U.S. citizens should consider the following rules that apply to U.S. government employee travel:

within 7 miles of the Gaza demarcation line;

within 1.5 miles of the Lebanon border;

on or east of Route 98 in the Golan; and

U.S. citizens planning to travel to Israel, the West Bank, or Gaza should consult the detailed information concerning entry and exit difficulties in the Country Specific Information (CSI). The CSI also provides detailed guidance on crime and safety conditions within Israel, Jerusalem, the West Bank, and Gaza.

We have just one question, although the beaches look lovely, why the f**k are you visiting Gaza anyway? 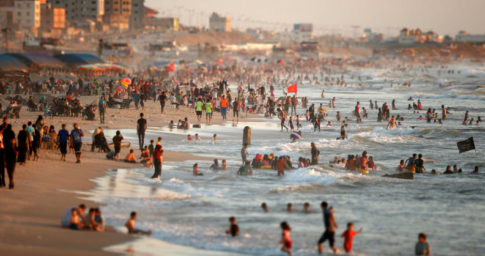