a “temporary protection tattoo that you can apply onto your skin. lt means: ‘My body belongs to me!’”

As if a sex attacker would give a f*** about a temporary protection tattoo. (But wait, it gets better!) 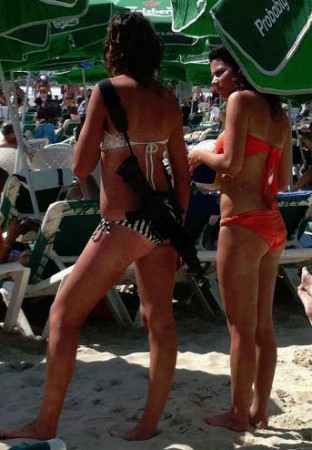 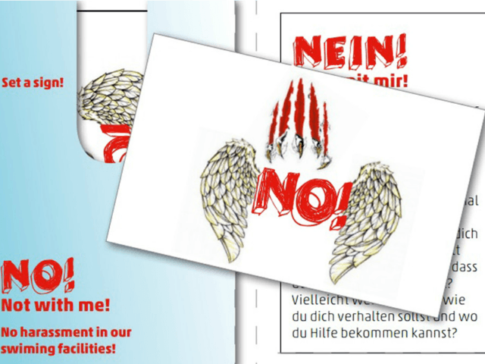 The measure comes as police report an epidemic of pool harassment and assaults in the wake of the “migrant crisis”. Officials connected to the campaign deny it has any links to the migrant influx however, claiming the attacks are not a new problem.

The “cool” and “empowering” stick-on motifs feature “a clear NO! with strong angel wings and sharp claws” according to the district’s website.

Campaign literature describes them as a “temporary protection tattoo that you can apply onto your skin. lt means: ‘My body belongs to me!’”

The temporary tattoos are to be handed to young people alongside leaflets with information about pool etiquette as part of the “No! Not me!” campaign.

The colourful leaflets caution that while “swimming is great fun”, there are “moments which are not funny at all and simply wrong!”

Behaviours the brochure warns young people to watch out for are groping, attempts to remove other people’s swimwear and stealth filming of people in the changing rooms.

Veronika Wäscher-Göggerle, who launched the campaign, said: “I think many girls are insecure. What is normal in daily interactions and what should not be allowed and needs to be reported?

“Illustrations have been made available at swimming pools and should make this clear.”

Ms Wäscher-Göggerle denied the campaign is a response to an epidemic of sex assaults in Germany since the “migrant crisis” saw over a million people enter the country last year.

Wäscher-Göggerle, the district’s women and families commissioner, insisted: “We were not aware of an increase in attacks [since the influx of migrants]. In fact, it is so that there are issues in every society which one can not ignore, but which need to be addressed again and again”.

Joachim Heuser of the German Bathing Society also stressed that there is no link between the attack prevention campaign and the migrant wave. He claimed there has been no change in the situation with sexual assaults in pools since the “migrant crisis”.

Mr Heuser argued that migrants’ lack of experience with swimming is a much bigger problem, citing issues like estimation of water depth, access to correct swimwear and inability to swim.

A police report leaked last month revealed there has been a “huge increase” in the number of cases of rape and sexual abuse of children in German pools. The document recorded that “the perpetrators are for the most part immigrants”