We understand that a teacher’s job is difficult and often thankless.  But so are a lot of jobs.  We also understand that private labor markets are fairly efficient and don’t award workers in the private workforce nearly the same “perks” received by California’s unionized teachers.  So when the State of California denies school administrators the basic rights afforded to every private employer in the State, like the ability to dismiss “grossly ineffective” employees, we have a little difficultly sympathizing with the “victorious” teachers.

Yesterday, California’s teachers won a huge “victory” that we fear will ultimately only serve to undermine the education of their students. California’s Supreme Court struck down a lawsuit filed by 9 public school students against the State of California alleging that overly generous legal protections afforded teachers directly disadvantaged students by keeping teachers in the classroom that had proven themselves to be “grossly ineffective.” The lawsuit alleged such protections violated the State’s constitution as they, by definition, created legal impediments that prevent California’s schools from providing an effective education to all of their students.  The lawsuit focused on three specific teacher protections including the requirement to provide tenure after just 18 months on the job, onerous dismissal statutes that make it nearly impossible for administrators to fire a teacher for bad performance and the LIFO statutes that requires teachers be laid off in accordance with seniority rather than effectiveness.  Per the lawsuit filed in 2012 (presented in its entirety at the end of this post):

Many principals and administrators do not even attempt to remove ineffective teachers, except in the most egregious cases of illegal or immoral conduct. And even in those egregious cases—for instance, where a teacher mocks an eighth grader recently hospitalized for attempted suicide, tells the suicidal boy to “‘[c]arve deeper next time,’” and allows other students to instruct the boy on how to commit suicide—teachers protected by the California statutes at issue remain in the classroom.

The original lawsuit focused on 3 key legal protections afforded teachers by the State of California which it alleged were harmful to students:

Requires California’s school districts to decide whether to provide “permanent” employment after just 18th months on the job.  A study referenced in the lawsuit found that 98% of teachers were ultimately granted tenure…sounds like it must be a really competitive process.

Pursuant to California Education Code section 44929.21, subdivision (b) (the “Permanent Employment Statute”), California school districts must decide whether to grant permanent employment to new teachers after less than 18 months.

Several studies have shown that it is not possible to determine a teacher’s long-term effectiveness with any degree of confidence during the first three years of teaching. In addition, teacher performance reviews used to determine whether a teacher should receive permanent employment do not consider student test data, student work, or any other indication whether the teacher’s students are actually learning. Nonetheless, within 18 months, California offers more than 98 percent of new teachers the full benefits of permanent employment.

Basically makes it impossible to fire teachers after they’ve been granted tenure.  Particularly disturbing is the amount of money the LA Unified school district spent in an attempt to dismiss teachers for poor performance.  The lawsuit points out that in the past decade the LAUSD spent $3.5mm in an attempt to dismiss just 7 teachers for poor performance ($500,000 per teacher).  Legal proceedings related to the dismissals lasted an average of 5 years and only resulted in the actual dismissal of 4 of the 7 teachers, while 2 of the teachers won large settlements and the 7th remained employed.

The Dismissal Statutes mandate that more than a dozen hurdles be cleared before a district can dismiss an underperforming teacher. These hurdles result in a labyrinthine dismissal process requiring investigations, hearings, union grievances, administrative appeals, court challenges, and re-hearings—all of which can and often do take multiple years and cost hundreds of thousands, or even millions, of dollars.

Recent studies have found that the Dismissal Statutes effectively prevent school administrators from dismissing teachers for poor performance. In the past decade, for example, LAUSD officials spent $3.5 million trying to dismiss seven of the district’s teachers for poor classroom performance. The process endured for an average of five years per teacher, and the average cost of the process to the LAUSD was $500,000 per teacher. Ultimately, only four of the seven teachers were dismissed, two of the teachers were paid large settlements, and one teacher remained employed.

The lawsuit also alleged that California’s laws were effectively discriminatory as the worst performing teachers often ended up in districts serving a disproportionate number of poor and/or minority students. The process was referred to as the “dance of the lemons.”  Essentially, with administrators unable to dismiss underperforming teachers they often have no choice but to transfer them to other schools within the district and often to schools that “serve high concentrations of economically disadvantaged students, students of color, and English learners.”

As described above, as a direct result of the Challenged Statutes, a certain number of grossly ineffective teachers who are unable to minimally prepare students to compete in the economic marketplace or to participate in a democracy obtain and retain employment in the California public school system. Rather than dismiss grossly ineffective teachers for their poor performance, the Challenged Statutes cause school administrators to transfer those teachers to other schools within the district, a phenomenon sometimes referred to as the “dance of the lemons.” Often, and disproportionately to the number of schools within a school district, grossly ineffective teachers are transferred to schools that serve high concentrations of economically disadvantaged students, students of color, and English learners.

The Dismissal Statutes require the following procedure to be followed in connection with attempting to dismiss a teacher for underperformance: 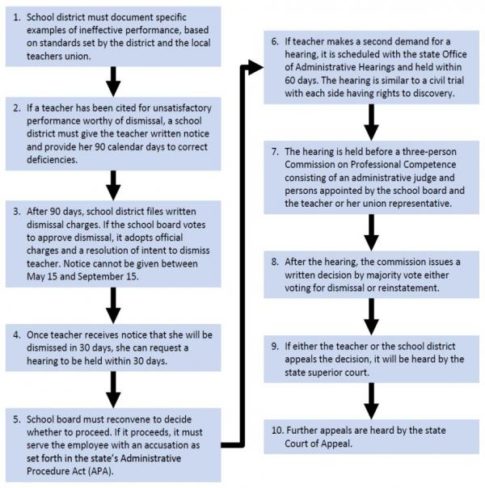 Mandates that layoffs be conducted in accordance with seniority and without regard for teacher’s performance, effectiveness or quality.

California Education Code section 44955 (the “LIFO Statute”) mandates the selection criteria by which teachers are to be included in any district-wide layoff. The LIFO Statute creates a seniority-based layoff system, irrespective of a teacher’s performance, effectiveness, or quality.

Per the LA Times, the teachers’ union representation was elated by the Supreme Court’s decision.  To our complete lack of surprise, he concluded that the real problem with California’s underperforming schools is that the State just needs to give teachers even more money.

“We applaud the state Supreme Court’s affirmation of the appeal court decision,” said Joshua Pechthalt, president of the California Federation of Teachers. “We can now turn closer attention to solving the actual problems we confront in our schools.”

We’re sure Josh has a point.  Washington D.C. spends among the most per pupil of any state in the country and those schools are amazing, right?