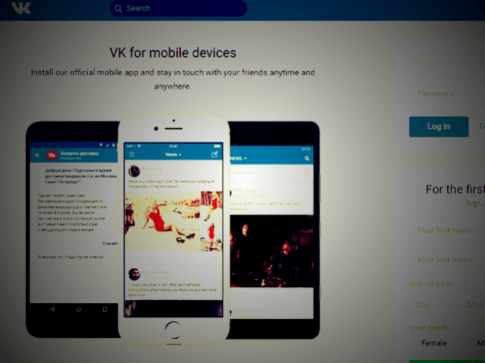 – Europeans In Exodus To Russian Facebook to Avoid Censorship:

Germans who are critical of Islam and mass migration are fleeing to the site VK, known as the Russian Facebook to avoid censorship of their remarks and possible raids on their homes.

Free speech in Germany has come under fire in recent months with an increasing amount of Germans being arrested jailed or fined for what the German state considers hate speech online. The German government has even enlisted the help of social media giants like Facebook to track down posts that are critical of Muslims or of mass migration

Once more known for being a favourite hangout for European political fringe groups, VK network has become the last bastion for many Germans who simply want to express their displeasure with the ongoing migrant crisis without fear of their comments being taken down or VK alerting police.

While it is currently unknown how many Germans are using the service several high profile leaders in the anti-Islamisation PEGIDA movement like leader Lutz Bachmann and former member Tatjana Festerling, have accounts on the site. According to VK their user-base worldwide is around 90 million individuals.

Both Bachmann and Festerling have had their problems with free speech in their native Germany. Bachmann was tried and convicted earlier this year for comments he had made on his personal Facebook page calling migrants various names in the wake of crimes perpetrated by migrants last year.

Festerling may also have trouble with the German authorities who are reportedly looking into charges over her trip to Bulgaria in which she joined a vigilante group to help track down any potential illegal migrants crossing the border from Greece and Turkey.

The mass migration to VK is largely in reaction to the policies of German justice minister Heiko Maas who last year worked with social media companies to remove offensive speech online. Maas and his ministry work with various organisations including the Amadeu Antonio foundation who are headed by a former East German Stasi agent named Anetta Kahane.

Kahane and Maas have been the subject of several protests by the hipster-right wing Identitarian youth movement who showed up at the offices of the Amadeu Antonio foundation dressed in Stasi uniforms asking if they could speak with “Comrade Kahane.”

The hacker group known as “anonymous” leaked the connection between the Justice Minister and Kahane earlier in the year and had their Facebook shut down as a result. They became one of the first migrant crisis critical groups to have made the migration to the Russian site where they now boast tens of thousands of followers.