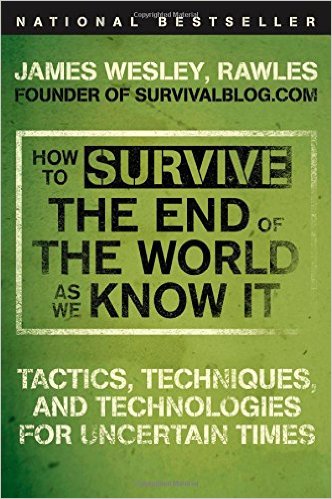 @Amazon.com: How to Survive the End of the World as We Know It: Tactics, Techniques, and Technologies for Uncertain Times

If you want to survive a collapse scenario this is a must-listen interview:

– Survival Expert James Rawles Warns: “There’s Going To Be A Massive Run On Firearms… Bigger Than Anything We’ve Ever Seen Before” If Hillary Win Is Imminent:

Survival Expert James Rawles Warns: “There’s Going To Be A Massive Run On Firearms… Bigger Than Anything We’ve Ever Seen Before” If Hillary Win Is Imminent

James Wesley Rawles is a former intelligence officer of the United States Army, prolific author and one of the top survival experts in the world. In his best-selling book series Patriots he paints a terrifying picture of a post-collapse America where food is scarce, currency is worthless, law and order have broken down, and survival is a daily struggle. It’s a fictional tale, of course, but one that is grounded in real-world possibilities.

In his latest interview with SGT Report, the SurvivalBlog.com founder breaks down the probability of such a scenario and explains that should it come to pass, where hyperinflation destroys our currency or a world war ravages America, the most important thing to have in your possession will be essential tangible assets.

Further, Rawles notes that as we get closer to the possibility of a Hillary Clinton Presidency, we may soon see panic buying of firearms, ammunition and gun-related accessories.

Venezuela is a microcosm of a centrally planned government and currency run amok… and we need to learn from their example.

…Wake up… watch what’s happening in Venezuela… you need to get your beans, bullets and band aids squared away… Those tangible items are going to be what pulls your family through the hard times ahead. And regardless of what happens to currencies, if you have a honest one year supply of food, preferably two years, and a good core position in physical precious metals that you hold at home… hidden… not in a bank because banks are vulnerable to banking holidays where they would limit or eliminate access to your safe deposit box…

If you have those tangibles… food, silver and my other favorite is common caliber ammunition… that’s the other thing you should really stock up on heavily.

I have a feeling that as we get closer to the election and if it looks like the poll numbers are leaning to Hillary winning there’s going to be a massive run on firearms… bigger than anything we’ve ever seen before… and along with that people are going to be rushing to buy any ammunition they can, reloading components and full capacity magazines.

Oh, and this website could really use some more support.