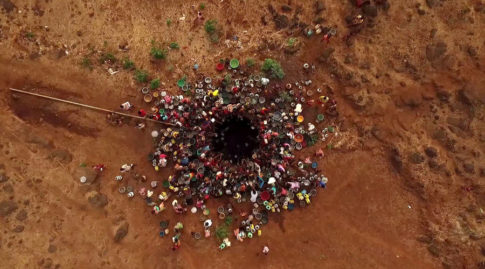 – India’s water crisis: 8 liters for 7 days, for drinking and all other needs (RT DOCUMENTARY) :

People in Indian states which were once agricultural leaders in the country, now have to pay for water delivered from other regions. The RT Documentary (RTD) team has traveled to areas suffering from a severe water crisis.

A water tanker delivers water to villages in the northern Indian state of Rajasthan, bordering Pakistan, once a week. There are no other sources of water anywhere nearby, locals told RTD journalists, saying their once fertile lands are turning into a desert.

“We have so many problems, but water is the major one,” residents say, adding that they’ve been facing it for five years now. According to the locals, the water disappeared suddenly, and “not in just one or two villages, but in entire community.”

They now have to rely on the water tank, with the allowance being eight liters per person for seven days – and that’s meant to cover all household needs as well. Any extra water comes at a price.

Trying to find ways to get the life-supporting liquid, people in the Indian states have been collecting monsoon water. But the water from the rainy season runs out fast, they say. The area which once used to be a pond has dried out now. Yet, desperate local women have been working hard to deepen the reservoir with their bare hands, aiming to collect more water in it once it rains.

Others have to take long daily trips to wells, and carry limited amounts of water from far away. With the water shortage dictating people’s lives, and many spending significant amounts of time on getting water, polygamy marriages have become more popular in the region.

“[If I had just one wife], she’d left at 6am for water, and she’d be back as late as 6pm. So I thought one [wife] could do the house work and mind children, while the other two could carry water,” a local man said.

In the sun-scorched Punjab, another state bordering Pakistan, the task of obtaining water for the households has become a matter of life or death. With no rain, farmers have to buy water to irrigate their plants for months, and then find themselves in huge debts. Unable to repay it, more and more people see suicide as the only way out, locals say.

While the number of suicides has reportedly skyrocketed, the authorities are said to deny that people are killing themselves over the water shortage.

“It’s not farmer suicides, it’s rural suicides, which affects the entire rural India. And that is 67 percent of the Indian population,” chairman of an educational society in Punjab, Inderjeet Singh Jaijee, told RTD. According to him, 3-4 bodies are found in the local canal every day, but the police say the rate of suicide is “zero, no bodies.” In one day RTD crew were at the canal, they’ve been shown seven bodies.

“In this part of Punjab, the primary reason [for suicides] is water. Isn’t it paradoxical? We have the rivers, we have all the water, but we can’t use it ourselves,” Inderjeet Singh Jaijee said, claiming the loss of the river water to other states is the major reason for suicides.

And then it’s catch-22 – according to the activist, the bodies remain in the water, with police not removing them, turning a blind eye to the situation, and the water is contaminated.

The current drastic situation has been caused by a number of reasons, locals believe. They’ve been citing too many people living in the same area, little rain and harvesting revolution where “people ruined the natural cycle” by chopping down forests and reversing river flows as the main causes.

The monsoon has been late for the past two years, and all the water from the reservoirs has been used up. When the rains finally arrived in 2015, they were too scarce to provide people in the region with water. In 2016, the monsoon season was late again.

The people in India are one of the first to experience a crisis which within 15 years will affect everyone on the planet, according to scientists’ warnings. And it might be the most devastating one humankind has ever faced.

Watch the documentary “H2WOE” on RT and RTD, premiering on September 22.