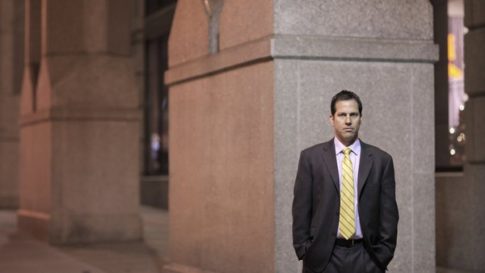 – Why A Deutsche Bank Whistleblower Turned Down A $8.25 Million Reward: In His Own Words:

At the height of the financial crisis, when risk assets were imploding and counterparties were in danger of overnight collapse, Deutsche Bank avoided failure and nationalization by fabricating the value of its $130 billion derivative portfolio of “leveraged super senior” trades.

Some history: back in 2005, these trades were seen as “the next big thing” in the world of credit derivatives, something which DB at the time was building a massive position in. They were designed to behave like the most senior tranche of a typical collateralised debt obligation, where assets such as mortgages or credit default swaps are pooled to give investors varying degrees of risk exposure. Deutsche became the biggest operator in this market, which involved banks buying insurance against the possibility of default by some of the safest companies, the FT writes.

There was just one problem: when it was building up its portfolio, Deutsche never accounted for the possibility of the financial world nearly collapsing. Which is why as the illiquid portfolio was careening, instead marking it to market – an act that would have resulted in the bank’s insolvency – DB’s risk managers misstated the value of the positions by anywhere from $1.5bn to $3.3bn.

Several years later, in 2012, the SEC found out about this, and in 2015 slapped a $55 million fine on Deutsche Bank for this criminal fabrication (nobody went to jail). “At the height of the financial crisis, Deutsche Bank’s financial statements did not reflect the significant risk in these large, complex illiquid positions,” said Andrew Ceresney, director of the SEC’s enforcement division. “Deutsche Bank failed to make reasonable judgments when valuing its positions and lacked robust internal controls over financial reporting.”

The reason why the SEC learned about DB’s massive mismarked derivative exposure, is because two former employee whistleblowers, Matthew Simpson and Eric Ben-Artzi, told it: the duo alleged that if Deutsche had accounted properly for its positions, its capital would have fallen to dangerous levels during the financial crisis and it might have required a government bailout to survive. The highest estimate for the unaccounted loss was $12bn. Which explains why Deutsche Bank was desperate to manipulated the numbers.

End result: DB got its wristslap with a token fine, the SEC came out looking like it knew what it was doing, and – as we learned today – the two whistleblowers got major awards for helping the SEC collected the $55MM fine, amounting to 15% each.

Only, something unexpected happened: as the FT writes, one of the whistleblowers who helped expose the false accounting at Deutsche Bank turned down a multimillion-dollar award from the Securities and Exchange Commission in protest against the agency’s failure to punish executives at the bank.

Eric Ben-Artzi, the former Deutsche risk officer, told the SEC he is declining his share of a $16.5 million payout — the third largest in the whistleblower program’s history — which represents 30% of the $55 million Deutsche Bank fine.

But why turn down enough money that most people, even ex-Wall Streeters, could comfortably retire on?  Ben-Artzi said the fine should be paid by individual executives, not shareholders, and suggested the “revolving door” of senior personnel between the SEC and Germany’s largest bank had played a role in executives going unpunished (understandably he had no comment about the spike in Deutsche Bank suicides in 2013-2014, particularly those emanating from its legal department).

“This goes beyond the typical revolving-door story,” Mr Ben-Artzi wrote in an opinion article for the Financial Times. “In this case, top SEC lawyers had held senior posts at the bank, moving in and out of top positions at the SEC even as the investigations into malfeasance at Deutsche Bank were ongoing,”

Which, incidentally, reminds us of a post we wrote back in May 2010, explaining why former Deutsche Bank General Councel, and then-SEC Director of Enforcement, “Robert Khuzami Stands To Lose Up To $250,000 If He Pursues Action Against Deutsche Bank.” We were right: neither Khuzami, nor the SEC, nor anyone else, pursued any charges against Deutsche Bank in the early years after the financial crisis. In retrospect, now that the German bank has been revealed to have manipulated literally everything, such oversight on behalf of the SEC was even more criminal than what DB did over the years.

Six years later, the FT comments on this too:

“Robert Khuzami, director of enforcement at the SEC between 2009 and 2013, was Deutsche’s former general counsel for the Americas. Between 2004 and 2013 Robert Rice was a senior lawyer at Deutsche Bank, where he led an internal investigation into the valuation claims; he then went to the SEC as chief counsel.  Both Mr Khuzami and Mr Rice were recused from the investigation. Dick Walker was enforcement director at the SEC between 1998 and 2001 and then joined Deutsche, later becoming general counsel; he left the bank this year. All three declined to comment. “

Needless to say, there is zero risk to Khuzami’s current job as partner in Kirkland’s Government & Internal Investigations Practice Group, which he joined in 2013. But hopefully, one day there will be, and if so it will be partially thanks to op-eds such as the one – written by Eric Ben-Artzi, who is currently a vice-president of risk analytics at BondIT – published in today’s FT and republished below.

For all those wondering why someone would turn down a $8.25 million whistleblower award, here is the explanation, straight from the source.

We must protect shareholders from executive wrongdoing

I just got word from the Securities and Exchange Commission that I am to receive half of a $16.5m whistleblower award. But I refuse to take my share. My award, which comes from a fund allocated by Congress, amounts to 15 per cent of the $55m fine the SEC imposed on Deutsche Bank in May 2015 after I informed regulators that my colleagues at the bank had been inflating the value of its massive portfolio of credit derivatives.

I was a risk officer at the bank, and one of the three whistleblowers who in 2010-11 reported the improper accounting internally and to regulators around the globe.

The SEC attorney who oversaw the investigation told the New York Times: “It’s the only enforcement action where we allege that a major financial institution failed to properly value a significant portion of its portfolio of complex securities.”

But Deutsche did not commit this wrongdoing. Deutsche was the victim. To be precise, the bank’s shareholders and its rank­-and­-file employees who are now losing their jobs in droves are the primary victims.

Meanwhile, top executives retired with multimillion­-dollar bonuses based on the misrepresentation of the bank’s balance sheet. It is therefore especially disappointing that in 2015, after a lengthy investigation helped by multiple whistleblowers, the SEC imposed a fine on Deutsche’s shareholders instead of the managers responsible.

Compare this outcome with a contemporaneous SEC enforcement action against the less connected executives of a smaller firm, Trinity Capital, and its subsidiary Los Alamos National Bank. The violations at Trinity seem similar to Deutsche, but orders of magnitude smaller. Five executives at Trinity were charged, the chief executive settled and paid a fine, and litigation continued against two senior officers.

“We will hold senior executives liable when they misstate the company’s performance and fail to come clean with shareholders,” explained Andrew Ceresney, director of the SEC’s Division of Enforcement.

So why did the SEC not go after Deutsche’s executives? The most obvious concern is that Deutsche’s top lawyers “revolved” in and out of the SEC before, during and after the illegal activity at the bank. Robert Rice, the chief lawyer in charge of the internal investigation at Deutsche in 2011, became the SEC’s chief counsel in 2013. Robert Khuzami, Deutsche’s top lawyer in North America, became head of the SEC’s enforcement division after the financial crisis. Their boss, Richard Walker, the bank’s longtime general counsel (he left the bank this year) was once head of enforcement at the SEC.

This goes beyond the typical revolving door story. In this case, top SEC lawyers had held senior posts at the bank, moving in and out of top positions at the regulator even as the investigations into malfeasance at Deutsche were ongoing.

This took place on the watch of Mary Jo White, the current chair of the SEC, whose relationship with Mr Khuzami and Mr Rice dates back 20 years. She bears ultimate responsibility for the Deutsche fine. In 2010 I joined Deutsche from Goldman Sachs as a vice­-president in the market­-risk department. I am a mathematician and had worked in risk­-modelling at other banks. When I joined Deutsche I was not made aware that an internal “investigation” was already under way into the inflated valuation of the bank’s $120bn portfolio of exotic credit derivatives.

Within a few months, though, I realised something was very wrong, and I called the internal hotline. That is when I met Mr Rice. He was then Deutsche’s top lawyer for compliance and regulatory affairs, and asserted that our conversations were subject to “attorney-client” privilege and could not be disclosed. I did not agree and was fired. My Wall Street career was ruined.

When I first helped the SEC investigation, the whistleblower award was a powerful incentive. My lawyers and ex-wife have a claim on a portion of my award, which I am not at liberty to reject.

Although I need the money now more than ever, I will not join the looting of the very people I was hired to protect. I never intended to turn a job in risk management into a crusade, but after suffering at the hands of the Deutsche executives I will not join them simply because I cannot beat them.

I request that my share of the award be given to Deutsche and its stakeholders, and the award money clawed back from the bonuses paid to the Deutsche executives, especially the former top SEC attorneys.

I would then be happy to collect any award for which I am eligible.