In the latest surprise move involving his key political advisors, overnight Donald Trump revealed the latest shake up to his presidential campaign, the second in two months, hiring a top executive from Breitbart News and promoting a senior adviser in an effort to “right his faltering campaign” according to the NYT. 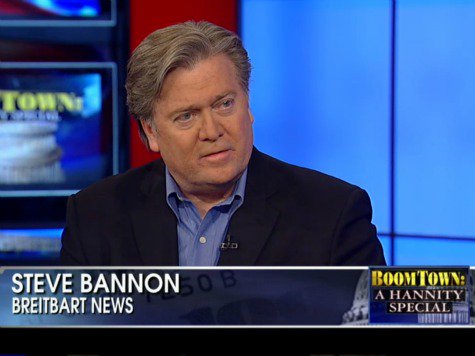 Stephen Bannon, the executive chairman of Breitbart News will become the Republican campaign’s chief executive, and Kellyanne Conway, a senior adviser and pollster for Trump and his running mate, Gov. Mike Pence of Indiana, will become the campaign manager. Paul Manafort, the campaign chairman, will retain his title. But the staffing change, hammered out on Sunday and set to be formally announced Wednesday morning, was seen by some as a demotion for Mr. Manafort. The Washington Post cited campaign aides as saying that while Trump respected Manafort, he felt “‘boxed in’ and ‘controlled’ by people “who barely knew him”.

The news, first reported by The Wall Street Journal, was confirmed early Wednesday by Ms. Conway in a brief interview, but she rejected the idea that the changes amounted to a shake-up and said that Mr. Manafort was not being diminished. Manafort was forced to deny any impropriety this week after the New York Times reported his name was on secret ledgers showing cash payments designated to him of more than $12 million from a Ukrainian political party with close ties to Russia. Manafort has denied impropriety. Manafort took on the role in March after Trump fired his predecessor Corey Lewandowski.

“It’s an expansion at a busy time in the final stretch of the campaign,” she said, adding that Mr. Manafort and his deputy, Rick Gates, would remain in their roles. “We met as the ‘core four’ today,” Ms. Conway added, referring to herself, Mr. Bannon, Mr. Manafort and Mr. Gates.

Why the change? People briefed on the move said that it “reflected Mr. Trump’s realization that his campaign was at a crisis point, as opinion polls show Trump falling behind Hillary Clinton in the race for the Nov. 8 election. It also indicates that Trump — who has chafed at making the types of changes his current aides have asked for, even though he had acknowledged they would need to occur — has decided to embrace his aggressive style for the duration of the race.”  Conway and Bannon, whose news organization has been favorable to Trump since he entered the primaries, are close with Robert and Rebekah Mercer, the father-and-daughter conservative donors who have become allies of the candidate and are funding a “super PAC” that is working against Hillary Clinton.

Conway has past presidential experience in primary races, but the role in a general election represents a new one for her. She is well liked by Mr. Trump’s daughter Ivanka and her husband, Jared Kushner, who had been serving as the de facto campaign manager. Bannon has no experience with political campaigns, but he represents the type of bare-knuckled fighter that the candidate had in Corey Lewandowski, his combative former campaign manager, who was fired on June 20.

Bannon has been a supporter of Mr. Trump’s pugilistic instincts, which the candidate has made clear in interviews he is uncertain about suppressing. He is also deeply mistrustful of the political establishment, and his website has often been critical of Speaker Paul D. Ryan and Senator Mitch McConnell, the majority leader.

Meanwhile, Trump is hinting he may be willing to accept some criticism to his campaigning style: on Monday, he delivered a speech on terrorism using a teleprompter rather than the off-the-cuff style he prefers. And on Tuesday, he offered yet another scripted address, this time on law and order. Republican VP candidate Pence, too, has privately worked to quell the growing concerns surrounding the Republican ticket. At the annual meeting of the Republican Governors Association in Colorado on Tuesday, Mr. Pence used his keynote speech to offer “encouragement” — a word he used several times — and reassurance to the crowd.

“We’re still winning hearts and minds every day despite an avalanche of negative media coverage,” Mr. Pence said during the closed-door session, according to audio provided to The Times. Time, Mr. Pence added, was on their side. “It’s preseason, for heaven’s sake,” he said. “The gun starts on Labor Day.”