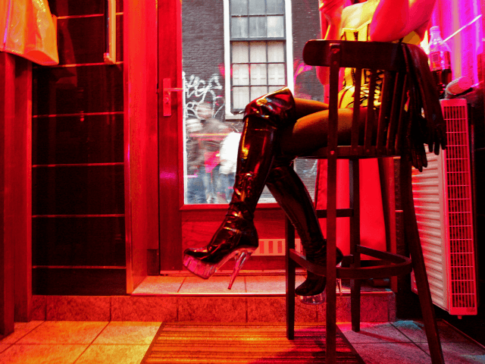 Three migrants tried to get away with paying for several prostitutes in Austria with counterfeit money only for the police to later discover thousands of fake euros in the migrants’ car.

Three Afghan asylum seekers took to visiting one of Austria’s legal brothels on Sunday night. The trio bought the services of four prostitutes at the undisclosed brothel or “laufhaus” in the Austrian capital of Vienna. When it came time to pay the prostitutes noticed something wrong with the cash she had been given by the migrant she had been with.It turned out to be of incredibly poor quality, so much so that the prostitutes were able to discern that it was counterfeit even in the low light of the brothel

It turned out to be of incredibly poor quality, so much so that the prostitutes were able to discern that it was counterfeit even in the low light of the brothel reports OE24.

After realizing she was being scammed by the migrant the prostitute called the Vienna police who arrived on the scene rapidly. The police arrested the migrant immediately and found the two other Afghans who had come with him to the brothel in nearby rooms. One of the migrants had even employed the services of two women and had parked his car outside of the brothel running, likely so they could all make a hasty getaway from the scene.

Upon inspecting the car of the migrants the police were able to find a further 9,760 euros in fake 20, 50 and 100 euro notes and even more cash on the asylum seekers, aged 23 and 26, had on their person. Both of the young migrant men were arrested at the scene for theft and counterfeiting. When asked by polcie how they came across such a large amount of cash the trio explained they had got it from selling flowers.

Migrant crime in Austria has drastically increased due to the influx of migrants coming into the country during the migrant crisis. Migrants have become the main source of street drugs on the streets of Vienna as a police report admitted that the bast majority of the street dealers int he city were migrants from Nigeria or elsewhere. Overall migrants had increased rug crime in the city by over ten percent this year.

Migrant gang crime has also exploded in Vienna with several large scale gang wars erupting on the city streets. In at least one case migrants have been hospitalized with severe injures from knives and other weapons over disputes relating to drugs, inter-ethnic conflicts or religious arguments.

In neighbouring Germany migrant crime is on the rise even as crime committed by German citizens is on a steady decline. Migrants are committing hugely disproportionate numbers of crimes across the spectrum from thefts, to battery and sexual assaults.