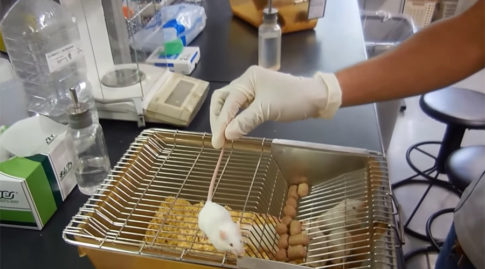 Scientists at Columbia University in New York have used light technology to control the mind of a living creature, demonstrating that brains can be manipulated to change behavior and processes far beyond what was previously thought possible.

Part of a $300 million “brain-mapping” project, the ‘U.S. BRAIN Initiative’ is, ahem, the brainchild of neuroscience professor Rafael Yuste and his team, and its results offer hope to millions of people around the globe suffering from neurological conditions such as epilepsy.

Published in Science on Friday, the study was carried out on mice and involved the administering of light-sensitive proteins targeted at certain areas of the brain. Once the proteins penetrated particular cells, scientists used special ultra-thin beams of light to make contact with the neuron inside and ‘turn it on’.

Favourite image of the day: #neurons and #astocytes in the mouse brain #microscopy#sciart#phdlife#researchpic.twitter.com/uSYvGmOCn0

The team found that “activation of a single neuron” can spark a response across an ‘ensemble’ of neurons, an effect which can be “reactivated at later time points without interfering with endogenous circuitry”.

During the experiments, researchers used a laser to stimulate a group of cells in a mouse’s visual cortex and have even restored sight and hearing to rodents who had lost those senses. Prior to this ‘optogenetic’ technology coming on stream, scientists had to surgically implant electrodes into the brains of subject mice but this new technique is far less invasive and offers more control.

“If you told me a year ago we could stimulate 20 neurons in a mouse brain of 100 million neurons and alter their behavior, I’d say no way,” Yuste is quoted in Medical Xpress. “I saw the results and said ‘Holy moly, this whole thing [the brain] is plastic.’ We’re dealing with a plastic computer that’s constantly learning and changing.”

“It’s like reconfiguring three grains of sand at the beach.”

Researchers believe that in the case of one particular mouse, the creation and manipulation of a group of neurons has projected a completely new mental image into the animal’s brain.

“These methods to read and write activity into the living brain will have a major impact in neuroscience and medicine,” said the study’s lead author and researcher at Columbia Luis Carrillo-Reid.

Back in 2003 Yuste and his colleagues discovered that groups of neurons, or neural ensembles, fired off in a coordinated sequential manner. As part of this study, researchers were able to create ‘neuronal microcircuits’ within the visual cortex of mice that were adopted and stored, altering actions and personalities.