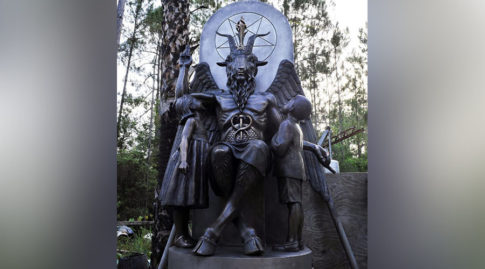 The mundanity of a local council meeting in Alaska was astonishingly broken when a decision to open up the forum to all religions resulted in a Satanist presenting the opening prayer – to Lucifer.

When the local government of Kenai Borough decided to welcome other faiths to their assemblies they probably didn’t envisage opening up their doors to the Lord of Darkness.

On Tuesday, Iris Fontana – reportedly a member of the Satanic Temple organization that views Satan as a symbol for rebellion and rational inquiry – gave the assembly invocation usually reserved for pastors.

Meeting attendees were reminded that they did not have to participate in the opening ritual.

Assembly members stood silently in a circle while Fontana asked them to “embrace the Luciferian impulse to eat of the tree of knowledge.” She then ended the surreal prayer with the words “Hail Satan.”

While traditional Satanism may invoke well-worn images of horned beasts, cloaked figures, and fiery underground lairs, the Satanic Temple is an atheist organization. Its website explains that it does not promote evil or the belief in supernatural beings.

“The Satanic Temple holds to the basic premise that undue suffering is bad, and that which reduces suffering is good. We do not believe in symbolic ‘evil.’ We embrace blasphemy as a legitimate expression of personal independence from counter-productive traditional norms,” it states.

Footage of the unorthodox assembly opening, which preceded a fairly humdrum meeting regarding a $138,000 paving project and changing a hospital boundary, has been posted on the Kenai Peninsula Borough website.

However, the excitement of a prayer to the supposedly God-banished angel has not gone down too well with some assembly members.

“I appreciate what the Assembly President’s doing with the prayer issue and trying to be fair, but I find it ironic that the prayer from the atheist wasn’t really about doing good and making good decisions,” assemblyman Dale Bagley told Radio Kenai.