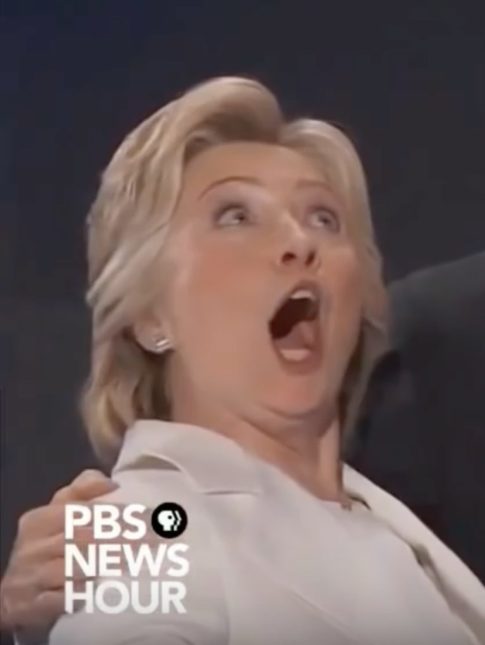 On December 27, 2015 Dilbert creator Scott Adams wrote the following on his blog.

One of the skills a hypnotist has to master is reading people’s inner thoughts based on their body language. That’s a common skill for people in the business world too, but hypnotists go deeper than looking at crossed arms and furrowed brows. We learn to look for subtle changes in breathing patterns, tiny changes in muscle tone, variations in skin color (blushing or not), word choice, pupil dilation, and more. I assume law enforcement people look for similar tells when doing interrogations.

As regular readers know, I’m a trained hypnotist. And to me, Hillary Clinton looks as if she is hiding a major health issue. If you read Malcolm Gladwell’s book, Blink, you know that so-called “experts” can sometimes instantly make decisions before they know why. In my case, I am going to make an “expert” hypnotist prediction about Hillary Clinton without knowing exactly which clues I am picking up, or whether I am hallucinating them.

Prediction: I’ll put the odds at 75% that we learn of an important Clinton health issue before the general election. That estimate is based on my own track record of guessing things about people without the benefit of knowing why. I think Trump is picking up the same vibe. He has already questioned Clinton’s “stamina.”

That was a pretty bold prediction at the time, and it looks like it might be coming true.

When I first saw the video below, of Hillary Clinton deflecting a question about Elizabeth Warren by wildly bobbing her head in two distinct spasms, I merely dismissed it as a faked video edited to make her look crazy. This is why I never shared or commented on it. I assumed there was no way Hillary Clinton actually acted like that in public, especially in front of reporters.

Ask yourself, have you ever interacted with someone in real life who responded in that fashion to a question, or to anything for that matter? Moreover, does that seem like the kind of behavior you’d expect or want out of a President?

The above interaction occurred on June 10th (click here for the original tweet), but it’s generated increased attention as of late as further videos of Clinton exhibiting bizarre, erratic behavior have emerged. Here’s another captured during the Democratic National Convention.

Now here’s the latest, and possibly most disturbing video of the series. This is the clip that has finally put many of us over the edge, wondering the heck is going on with this woman.

As you can see, when protesters appear at around the 8 second mark, Hillary Clinton completely freezes up. It’s pretty subtle, but yet extremely obvious to the man who is being referred to by some as her “handler;” a man who immediately jumps on stage to comfort her, scramble secret service members away and walk her through the episode by repeatedly saying “keep talking,” which she eventually does (for more on this angle, read: Who is Hillary’s Handler).

This episode warrants a detailed explanation by the Hillary campaign to the American public. How can someone incapable of finishing a campaign stump speech without personal coaching be elected President? Moreover, why isn’t the mainstream media asking the simple questions that I, and countless others are asking?

I’d understand not making a big deal about any of these videos in isolation, but taken together, there is obviously something very wrong with Hillary Clinton. As such, the American public deserves a press that will at least ask the important questions so many of us are asking.

To prove the point, here’s what came up when I took to Google to do a search: 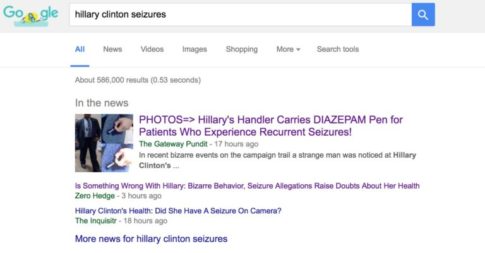 Here’s what came up as the top stories. 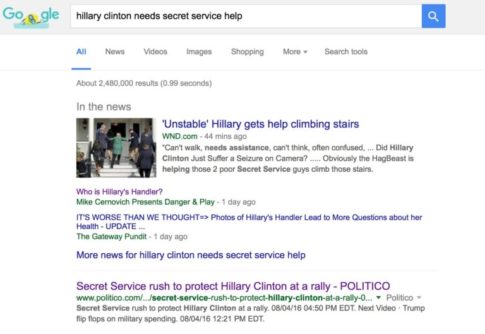 The only “mainstream” news source at the top is Politico, and they only cover it with an extremely misleading headline implying that the secret service merely rushed in to protect her. If you watch the video, it’s clear they did a whole lot more than that. Indeed, a specific individual jumped up on stage as soon as she froze and coached her out of her seeming paralysis. That’s what clearly seems to have happened, yet the media is completely brushing it off.

The three videos highlighted here are of events that have occurred in the past two months alone. Three extremely bizarre and, quite frankly, frightening behavioral episodes by someone holding a large lead in the polls to be the next President of these United States. Yet the media can’t be bothered. Why not?