– Federal Agency Says Wearing “Don’t Tread On Me” Hat Might Be Racist:

Submitted by Andrew Stiles via HeatSt.com,

Wearing a Gadsden Flag hat to work could be considered racial harassment, according to the Equal Employment Commission, the government body that oversees “hostile work environment” harassment claims against federal agencies.

The iconic flag, which originates from the Revolutionary War, features coiled snake above the words “Don’t Tread On Me.” 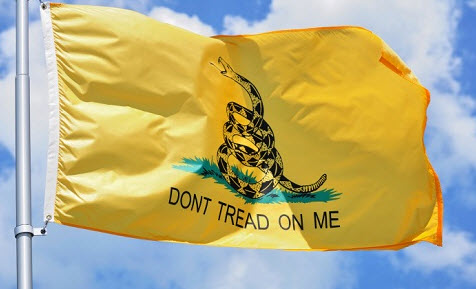 In recent years, it has become a favorite symbol of the Tea Party movement and conservative activists.

Earlier this year, the EEOC received a complaint from a “Shelton,” an African American, who charged that his employer (the federal government) had subjected him to racial discrimination when a coworker “repeatedly wore a cap with an insignia of the Gadsden Flag.”

Shelton (not his real name) said he found the cap to be “racially offensive” because the man who designed it in 1775, Christopher Gadsden, was a slave owner and because the insignia was a “historical indicator of white resentment against blacks stemming largely from the Tea Party.”

The EEOC acknowledged that the flag did not originate with the Tea Party movement, and was created centuries ago “in a non-racial context.” However, the commission also found that the Gadsden Flag could be “interpreted to convey racially-tinged messages in some contexts,” citing as an example a 2014 shooting spree in which white supremacists draped Gadsden Flags over the bodies of two murdered police officers.

“Certainly, Complainant ascribes racial connotations to the symbol based on observations that it is sometimes displayed in racially-tinged situations,” the commission wrote.

The commission concluded that the claim “must be investigated to determine the specific context in which [the hat-wearing coworker] displayed the symbol in the workplace,” and called for the gathering of “evidence that would illuminate the meaning conveyed by [the coworker’s] display of the symbol.”

Eugene Volokh at the Washington Postwrites that even the threat of legal liability in such case is likely to prompt employers to crack down on free expression as a mere precautionary measure, even if such speech is protected by the First Amendment.

Finally, we leave it to SHTFPlan.com’s Mac Slavo to conclude so eloquently:

It is completely outrageous. It is a Rorschach test for being offended. This case is the first of what will be many in an formal exercise in absurdity and arbitrary loss of rights. Apparently it is doesn’t matter what the symbol that offends actually stands for, or what the person wearing/associated with it actually intended to express.

Instead, the door is now wide open for anyone to be fired, disciplined or put on a list even though they may have done nothing at all except express their free speech. We’re not even talk about real substantial cases here… everything is racist; everything is potentially terrorist; and absolutely everything is offensive. Don’t even try to express yourself at all.