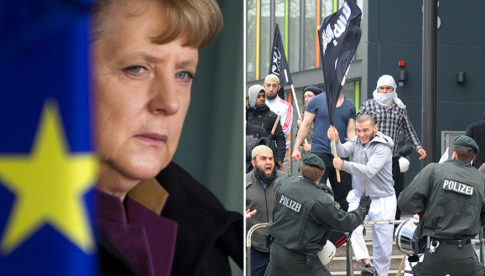 German Chancellor Angela Merkel (left) rejects criticism of her decision to allow more than a million mostly Muslim migrants to enter Germany last year. “We can manage our historic task… we can do it. … Anxiety and fear cannot guide our political decisions,” she said at a July 28 press conference, adding, “I cannot promise you that we will never have to take in another mass wave of refugees.”

As ArmstrongEconomics’ Martin Armstrong rages, Merkel refuses to admit that she is wrong and will not reverse her refugee policy despite all the problems, attacks, rapes, and terror.

This is the precise reason why career politicians are no longer acceptable. They will never defend the people nor will they ever admit a mistake. All we see is more and more attacks and this one politicians is threatening to destroy the very framework of Europe. We will see more and nations raise borders and if Germany wishes to take in millions, they will have to keep them all for themselves. She is making a decision for all of Europe and this amounts to a completely undemocratic position whereby no citizen of any other member States has any right to object or vote her out of office.

And as The Gatestone Institute’s Soren Kern details, Chancellor Merkel said she knows that Germans are worried about their personal safety: “We are doing everything humanly possible to ensure security in Germany,” she noted, but added, “Anxiety and fear cannot guide our political decisions.”

Speaking at an annual summer press conference in Berlin on July 28, a defiant Merkel ignored critics of her refugee policies and insisted there would be no change to her open-door migration stance. She also said she bears no responsibility for a recent spate of violent attacks in Germany.

Germany has been rattled by an axe attack on a train in Würzburg, a mass shooting in Munich, a machete attack in Reutlingen and a suicide bomb in Ansbach — all within a week.

The attacks, which left 13 dead, were all carried out by Muslims: Three of the attacks were carried out by asylum seekers and one by a German-Iranian who harbored a hatred of Arabs and Turks.

Merkel, who interrupted her summer holiday to attend the 90-minute press conference, which was pushed forward by a month, reiterated her credo: “We can do it!” (“Wir schaffen das!“). She has repeated the phrase over and over since Germany’s migration crisis exploded on September 4, 2015, when she opened up the German border to tens of thousands of migrants stranded in Hungary. She said:

“We decided to fulfill our humanitarian obligations. I did not say it would be easy. I said back then, and I will say it again now, that we can manage our historic task — and this is a historic test in times of globalization — just as we have managed so much already, we can do it. Germany is a strong country.”

Merkel said the goal of jihadists was to “divide our unity and undermine our way of life. They want to prevent our openness to welcoming people. They want to sow hate and fear between cultures and also among religions.”

The chancellor said she knows that Germans are worried about their personal safety: “We are doing everything humanly possible to ensure security in Germany,” she noted, but added, “Anxiety and fear cannot guide our political decisions.”

Merkel also outlined a nine-point plan to increase security in Germany: 1) an early-warning system to identify radicalization among migrants; 2) an increase in staff at Germany’s intelligence agencies; 3) an information technology office to focus on tracking internet communications between jihadists; 4) regular joint exercises with the police and the military to practice counter-terrorism measures; 5) expanding research on Islamic terrorism and radicalization; 6) improving European cooperation on intelligence sharing; 7) restricting the sale of weapons online; 8) a national registry to monitor people entering and leaving the country; and 9) making it easier to deport asylum seekers who break the law.

Merkel concluded by refusing to budge an inch: “For me it is clear: we stick to our principles. We will give those who are politically persecuted refuge and protection under the Geneva Convention.” She added: “I cannot promise you that we will never have to take in another mass wave of refugees.”

Merkel has come under increasing criticism for her handling of the migration crisis. The anti-immigration party, Alternative for Germany (AfD), noted:

“Given the mounting, extremely serious incidents, the AfD calls on the government urgently to fulfill its duty and stabilize the security situation in Germany through effective border controls. Other steps such as the immediate and consistent deportation of offenders must necessarily follow.”

“Not only have Angela Merkel’s policies been a stimulus package for right-wing populists, the security risks that the chancellor has created with her open borders are also abundantly clear.”

The newspaper, Die Welt, said Merkel’s repetition of the words “We can do it!” amounted to a “provocation” and criticized her nine-point plan as “vague.” In a scathing attack, the paper’s political editor, Thomas Vitzthum, wrote:

“Angela Merkel maintains her entire position. She defends her actions last year. No admission of error can be heard. Nor should anyone expect to see repentance in the future. The chancellor remains committed to her current course of action. Today is not the time to discuss what additional new measures should be taken, she says. A classic Merkel refrain follows: ‘There must be a thorough analysis.'”

In an editorial, the right-leaning newspaper, Junge Freiheit, wrote that Merkel does not care about the consequences of her policies:

“But who are the ‘we’? Not a word from Merkel. Not a word about the women who are victims of sexual assault in Cologne and elsewhere — the victims of those who Merkel brought into the country with her open-border policy and friendly face.

“Not a word to the citizens who for a year have had to deal with the consequences of the asylum onslaught. Not a word to the local communities that are unable to cope with the financing and burdens of accommodating asylum seekers. Not a word for the police, who have reached their limits thanks to unbridled immigration. Not a word for the food pantries that need to ration the distribution of food due to distribution battles. Not a word about the split in society that Merkel’s refugee policy has caused — not just a split country, but also splits among families and groups of friends. Not a word that her decisions have reduced Germany’s influence in Europe.”

“Things can only go well if the problems are really solved! In particular, the deportations of rejected asylum seekers are a major problem. For months, the government has pledged to speed up repatriations, but little headway has been made. And also for the nine-point plan to combat terrorism: let us see action rather than just waiting and talking! Because by next summer, Germans will judge Merkel on what she really has done.”

A recent poll found that two-thirds of Germans oppose a fourth term for Merkel. Only 36% of respondents said they wanted Merkel and her CDU to lead the government after federal elections in 2017.