Atmospheric CO2 levels have been declining for the last 500 million years, since the beginning of the Cambrian Period. 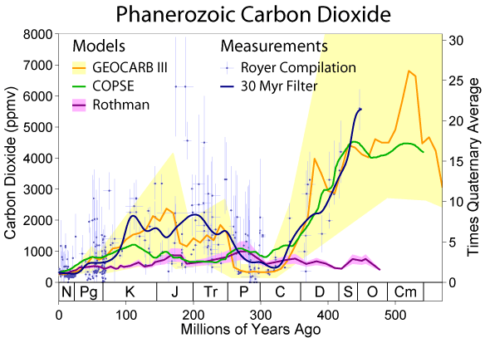 Note that present-day CO2 levels are shown on the LEFT of this chart.

“By 250 Mya the planet had buried most of the free atmospheric carbon and the atmosphere looked much as it does today,” says long-time reader Duster.

“Then came the Permian extinction. Atmospheric carbon recovered over the next 100 million years reaching about half of the early Phanerozoic level before resuming its downward trend to the present.

“There is literally no significant correlation of temperature and CO2 over the Phanerozoic.

“Temperatures seem to plateau with abrupt descents and recoveries that may or may not fall near changes in CO2 trends.

“The present planetary state most closely resembles the later Permian – immediately prior to the largest extinction event in the geological record.

“The most parsimonious explanation of that event is that biological systems had placed so great a demand on carbon that its availability became so fraught that entire ecosystems collapsed for want of carbon.

“Carbon, it’s what keeps you alive.”