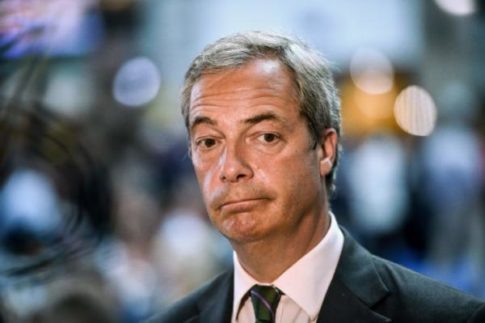 Nigel Farage, UKIP leader and passionate advocate for the UK to leave the European Union, announced unexpectedly today that he is stepping down as party leader, just days after he led a successful, and historic, campaign to Leave the European Union. Speaking in Westminster, Farage said the Brexit referendum was about Britons taking their country back, and having succeeded at that, Farage now “wants his life back.” His resignation completes the recent chaos in UK politics which has seen both the Conservative and Labour parties scramble to find new leadership in the aftermath of the Brexit vote.

Farage has resigned before, in May 2015, following the U.K. general election. On that occasion he returned a few days later when the party rejected his resignation. This time however, he said, “I won’t be changing my mind again, I can promise you.” Farage said his reason for getting into politics was to get Britain out of the European Union, and with that achieved, “I feel I’ve done my bit.”

He said UKIP had “clearly established ourselves as the third political force in this country,” and should the Brexit exit negotiations not prove satisfactory “then in 2020 watch this space.”

“I have never been, and I’ve never wanted to be a career politician. My aim in being in politics, was to get Britain out of the European Union. That is what we voted for in that referendum two weeks ago, and that is why I now feel that I’ve done my bit, I couldn’t possibly achieve more than we managed to get in that referendum, and so I feel it’s right that I should now stand aside as leader of UKIP.”

“I will continue to support the party, I will support the new leader. I will watch the renegotiation process in Brussels like a hawk, and perhaps comment in the European Parliament from time to time. I’m also very keen to help the independence movements that are springing up in other parts of the European Union because I’m certain of one thing, you haven’t seen the last country that wants to leave the EU.“

Nonetheless he said that he “will watch the renegotiation process in Brussels like a hawk, and perhaps comment in the European Parliament from time to time.” The move sees UKIP, the United Kingdom Independence Party, join the Labour and Conservative Parties in looking for a new leader.

“During the referendum campaign I said ‘I want my country back’, but what I’m saying today is ‘I want my life back’, and it begins right now – thank you.”

In a statement, Farage said that UKIP is in a good position, and its best days  may be yet to come.

I have decided to stand aside as Leader of UKIP. The victory for the  ‘Leave’ side in the referendum means that my political ambition has been  achieved. I came into this struggle from business because I wanted us  to be a self-governing nation, not to become a career politician.

UKIP is in a good position and will continue, with my full support to  attract a significant vote. Whilst we will now leave the European Union  the terms of our withdrawal are unclear. If there is too much  backsliding by the Government and with the Labour Party detached from  many of its voters then UKIP’s best days may be yet to come.

I would like to take this opportunity to thank you the membership for  your extraordinary support and generosity over the many years, I could  not have done it without you.

Thank you to all my supporters in @UKIP and beyond. Delighted with the result we fought for so long to achieve. #BrexitBritain

One of Farage’s main internal critics, and UKIP’s only MP, tweeted his simple response: