In the summer of 2007, two inconsequential Bear Stearns property-related funds were gated and then liquidated, exposing the reality of the US housing bubble and catalyzing the collapse of the financial system. While equity markets have rebounded exuberantly post-Brexit, suggesting all is well, British property-related assets have tumbled and, as The FT reports,Standard Life has been forced to stop retail investors selling out of one of the UK’s largest property funds for at least 28 days after rapid cash outflows were sparked by fears over falling real estate values. As one analyst warned, “the risk is this creates a vicious circle, and prompts more investors to dump property.”

The company cites “exceptional market circumstances” following an increase in redemption requests from the referendum.

The drop in NAV is the largest since Lehman… 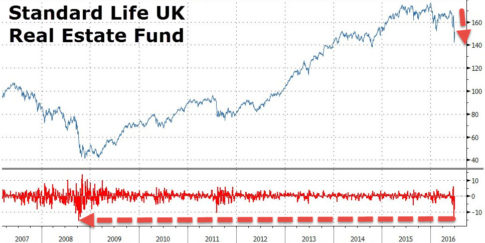 The £2.9bn commercial property fund will need to sell real estate to raise cash before any money can be redeemed.

And, as The FT reports, the last property crash in the UK in 2007 was preceded by a wave of similar gatings by funds struggling to meet investor demands for cash. They led to firesales of property that added to the pressure on an already falling market.

Last week, Standard Life was one of a handful of UK open-ended property funds to mark down the value of the buildings they own by 5 per cent in the wake of the UK’s vote to leave the EU.

In another sign of stress in the sector, some closed-ended property trusts are trading at discounts of more than 10 per cent to their net asset value, which reflects fears over the future of commercial property.

“Given the outflows the sector seems to be experiencing, this could well put downward pressure on commercial property prices,” said Laith Khalaf, senior analyst at Hargreaves Lansdown. “The risk is this creates a vicious circle, and prompts more investors to dump property, until such time as sentiment stabilises.”

Retail investors have been attracted to property funds in recent years in part because returns from other types of investment have been so low.

Investors in the fund will be unable to redeem their holding for at least 28 days. The asset manager said the suspension on the fund’s trading will end “as soon as practicable”, and will be reviewed every 28 days.

Standard Life said the decision was taken to avoid the fund’s managers being forced to sell buildings quickly in order to satisfy redemption requests, which have increased “as a result of uncertainty for the UK commercial real estate market following the EU referendum result”.

“Unless this selling process is controlled, there is a risk that the fund manager will not achieve the best deal for investors in the fund, including those who intend to remain invested over the medium to long term.”

Adrian Lowcock, head of investing at Axa Wealth, said the suspension of the fund “brings back to focus the issues with investing in open-ended property funds”.

“During the financial crisis many investors were stuck in funds which had closed to redemptions as liquidity dried up,” he said.

A spokeswoman said the fund will be closed for the foreseeable future to give the fund manager more time to sell assets to raise its cash levels at the best possible price. “The suspension was requested to protect the interests of all investors in the fund and to avoid compromising investment returns from the range, mix and quality of assets within the portfolio.”

Storm in a teacup we are sure… because once Carney drops the next QE bomb, everything will be fixed, right? Or dead canary in the Brexit contagion coalmine? The big question is – how do you hedge your exposure for th enext 28 days until you might – just might – be allowed to get your money back? 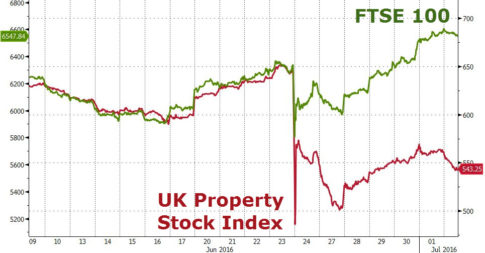 As we ironically noted previously,Brexit is a Bear Stearns moment, not a Lehman moment. That’s not to diminish what’s happening (markets felt like death in March, 2008), but this isn’t the event to make you run for the hills. Why not? Because it doesn’t directly crater the global currency system. It’s not too big of a shock for the central banks to control. It’s not a Humpty Dumpty event, where all the Fed’s horses and all the Fed’s men can’t glue the eggshell back together. But it is an event that forces investors to wake up and prepare their portfolios for the very real systemic risks ahead. In other words – it’s the beginning of the end.