For all the scaremongering and threats of an imminent financial apocalypse should Brexit win, including dire forecasts from the likes of George Soros, the Bank of England, David Cameron (who even invoked war), and even Jacob Rothschild, something “unexpected” happened yesterday: the UK was the best performing European market following the Brexit outcome. 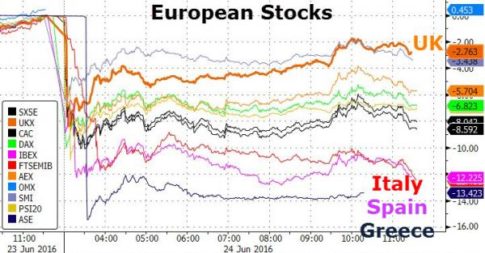 This outcome was just as we expected three days ago for reasons that we penned in “Is Soros Wrong“, where we said “in a world in which central banks rush to devalue their currency at any means necessary just to gain a modest competitive advantage in global trade wars, a GBP collapse is precisely what the BOE should want, if it means kickstarting the UK economy.”

On Friday, the market started to price it in too, and in the process revealed that the biggest sovereign losers from Brexit will not be the UK but Europe.

Not only, though. Because as we noted yesterday in “Who Are The Biggest Losers From Brexit?”, there is an even bigger loser than the EU: Britain and Europe’s wealthiest people. 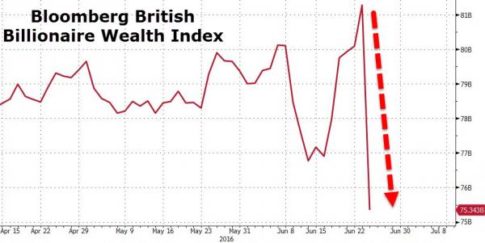 Britain’s 15 wealthiest citizens had $5.5 billion erased from their collective fortune Friday after the country voted to leave the European Union. Britain’s richest person, Gerald Grosvenor, led the decline with a loss of $1 billion, according to the Bloomberg Billionaires Index. He was followed by Topshop owner Philip Green, fellow land baron Charles Cadogan and Bruno Schroder, majority shareholder of money manager Schroders Plc.

It wasn’t just Britain: as Bloomberg added overnight, the world’s 400 richest people lost $127.4 billion Friday as global equity markets reeled from the news that British voters elected to leave the European Union. The billionaires lost 3.2 percent of their total net worth, bringing the combined sum to $3.9 trillion, according to the Bloomberg Billionaires Index. The biggest decline belonged to Europe’s richest person, Amancio Ortega, who lost more than $6 billion, while nine others dropped more than $1 billion, including Bill Gates, Jeff Bezos and Gerald Cavendish Grosvenor, the wealthiest person in the U.K.

Ironically, it turns out that when George Soros threatened “The Brexit crash will make all of you poorer – be warned“, what he really meant is “it will make me poorer.” And yes, George, the people were warned which is why they voted the way they did.