– The Opening Ceremony of the World’s Largest Tunnel Was a Bizarre Occult Ritual:

Attended by Europe’s most powerful people, the opening ceremony of the Gotthard Base Tunnel in Switzerland was a dark, disturbing, weirdly satanic ritual. Here’s a look at another celebration of the occult elite.

Measuring over 57 km and costing over 11 billion Euros, the Gotthard Base Tunnel is world’s longest and most expensive tunneling project in History. Going through the Swiss Alps, the tunnel took 17 years to complete and is said to be a symbol of European unification in a context of rising nationalism and closing borders.

To celebrate the inauguration of this tunnel, an elaborate ceremony was presented in front of European dignitaries such as Chancellor Angela Merkel of Germany, President Francois Hollande of France and Italian Prime Minister Matteo Renzi. While most would expect an up-beat, celebratory ceremony, guests were rather treated to a disturbing show orchestrated by German director Volker Hesse, where a man dressed as a goat presided a strange ritual.

As I discussed in my article on the opening and closing ceremonies of the 2012 London Olympics, the occult elite enjoys putting on full display its agenda and philosophy symbolic, dramatic displays which are reminiscent of dramas re-enacted in secret society rituals. Furthermore, there is no better way to showcase sheer power than putting the “Illuminati stamp of approval” on massive mega-projects such as the Olympics or major constructions.

Here’s part of the show.

The ceremony begins with workers dressed in orange walking slowly to the beat of a rhythmic military drum. 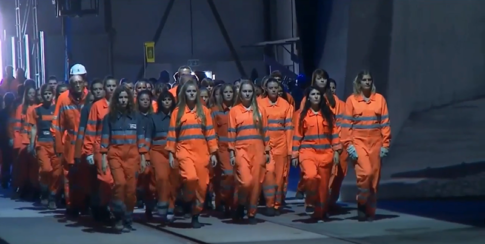 This scene represents the workers being sent to work on the tunnel.

There is something very “New World Order” to this militaristic portrayal of the working force. As the drums get more rhythmic, the workers get more excited, dancing around and jumping through loops.

Then, things get stranger. A train brings a group of young people dressed in white underwear.

Dressed in white, these these men and women represent the masses who will travel through the tunnel. 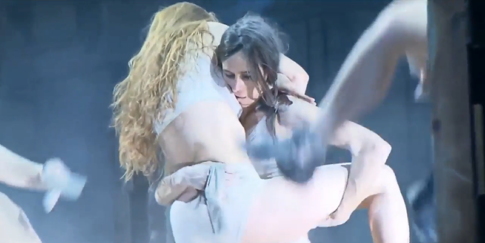 For some reason, the ceremony becomes strangely sexual as the white-clad people start groping each other.

After portraying the workers as zombie soldiers, the ceremony portrays the general population as a bunch of lascivious people who appear to be extremely suggestible.

Then, emerging from that train is a demonic fallen angel, a baby-faced Lucifer.

This scene is meant to “honor” the workers who died during the construction of the tunnel. Why is baby Lucifer creepily flying above them?

From this point on, the event turns into an all-out satanic ceremony. 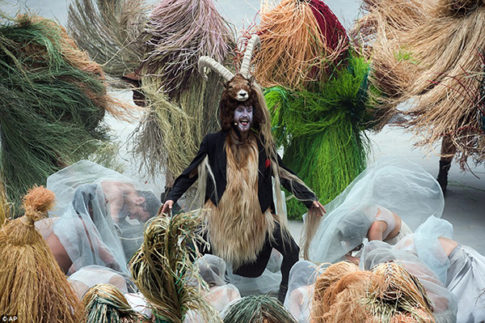 A man dressed as a goat becomes the master of ceremony as the everybody else pays homage to him.

What does this have to do with the building of a tunnel? Mass media, in its vein attempts at explaining this ceremony, state that there are mountain goats in the Alps … which explains the goat-man. But why is this goat-man in such a position of power? Why are people bowing down to him?

The ceremony appears to draw inspiration from local folk tales, specifically the legend about The Devil’s bridge, which goes through Gotthard Pass.

The legend of this particular bridge states that the Reuss was so difficult to ford that a Swissherdsmanwished the devil would make a bridge. The Devil appeared, but required that the soul of the first to cross would be given to him. The mountaineer agreed, but drove a goat across ahead of him, fooling his adversary. Angered by this sham, the devil fetched a rock with the intention of smashing the bridge, but an old woman drew a cross on the rock so the devil could not lift it anymore. The rock is still there and, in 1977, 300,000 Swiss francs were spent to move the 220 ton rock by 127 m in order to make room for the new Gotthard road tunnel.

While the devil lost in the legend, he appears to have won in the tunnel’s opening ceremony.

Men walk in a strange procession while holding horned skulls as if they are priceless religious artifacts.

Women dressed in white hold small horns on their heads as if saying “We accept the goat-man as our god”. 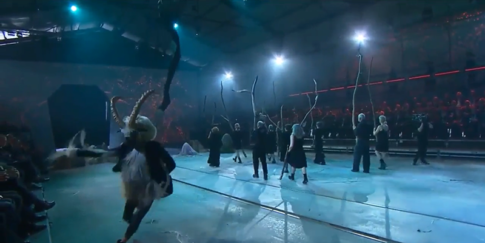 All the while, the goat-man runs around, getting increasingly energized.

The second part of the ceremony takes place outside and follows the same basic narrative. Zombie workers go first, followed by people in underwear, to the welcome Satan himself.

For some reason, workers take off their shirt and get in military formation.

Young people in underwear, looking very confused stumble around. This is how the elite perceives the masses.

Once again, the ceremony portrays the death of workers in a rather disturbing matter.

The workers are replaced with three creepy ghosts.

We then see them floating in front of a giant All-Seeing eye. Is the elite celebrating human sacrifice?

The goat-man makes his entrance, preceded by people wearing white veils … like brides before a wedding.

While the goat-man runs around on stage, screaming like a possessed man, the big screen displays images of the goat-man looking extremely evil. Three scarabs float in front of him. Does Satan see the three dead workers as mere insects?

As people dressed in white bow down to the goat-man, a circle of eyes watches over them, confirming that this was one big, blatant, Satanic ceremony brought to you by the occult elite.

A woman drapes the goat-man in white as is saying “You are now the king of the world”.

The occult elite is all about power and symbolism. The above ceremony showcased both. Through the opening ceremony of the world’s deepest and longest tunnel, the occult elite tells the world that they control the world’s resources and manpower. In other words, they are the only ones who can make such projects happen because they control politics, finance and business. Furthermore, by creating overtly occult  ceremonies, the elite tells the world: “This is what we believe in, this is what we think of you and there is nothing you can do about it.”

The opening ceremony of the Gotthard Base Tunnel turned a great feat of engineering into a religious ceremony dedicated to Baphomet while somewhat ridiculing the workers who sacrificed their lives and the masses who will travel through the tunnel. Then, Europe’s most powerful people stood up and gave a standing ovation to this ceremony dedicated to the true ruler of the occult elite.

1 thought on “The Opening Ceremony Of The Gotthard Base Tunnel, The World’s Largest Tunnel, Was A Satanic Ritual”