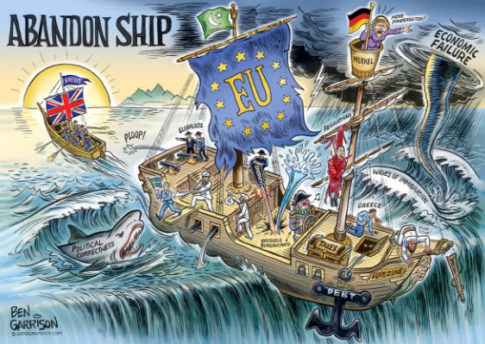 As Brexit appears to gathering pace among British voters, Bloomberg Briefs interviews Hung Tan, executive managing director at the Institute of International Finance in Washington, DC., to understand the global impact of a decision by Britain to leave The EU…

Q: What would happen if Britain voted to leave the EU?
A: It is not Lehman in the short term in terms of markets being in a panic or chaotic mood, because the central banks will try to pacify that. But it is more significant than Lehman in its longer-term impact on global growth. Through trade and investment channels, there will be a downward impact on growth.

Q: Isn’t it just a European issue?
A: It’s not just a vote for the U.K. exiting Europe, it is a symptom of the discontent and unhappiness of citizens with the status quo. They want change, but nobody can articulate what is it that they want. The impact in an exit vote of “leave” winning would be very far-reaching and impact long-term events. Near term there would be significant adjustment in financial markets.

Q: How much could markets move?
A: The Bank of England, ECB and others have said they are prepared to supply a significant amount of liquidity just to calm the volatility. Over a week’s time [after the vote], I think it would reach some kind of lower equilibrium.

Q: What would central banks buy?
A: The Bank of England so far has bought U.K. gilts and they may want to look at high-grade corporate bonds. If they feel they may have exhausted buying in a certain asset class, they may want to widen the list of assets that they are able to buy.

Q: Which countries would suffer most if the U.K. voted to exit?
A: First the U.K. and Europe, but then emanating from there to trading partners of Europe, and then to emerging market countries through the decline in world trade. Large economies able to rely on domestic consumption and the services sector should be able to generate a measure of growth and cope with it better than others. More open economies that have been reliant on world trade as a growth model will suffer more.

Q: What happens to the U.K. after exit?
A: Whatever new arrangement the U.K. may manage to have — the Norway model, the Switzerland model, or relying on the WTO to manage its relationship with the EU — is very problematic. All of those still require U.K. firms to observe and respect EU rules if they want to do business in the EU.  Most important for the City of London, financial services passporting will be either not available or significantly curtailed.

Q: What’s the U.K. economic impact?
A: The true problem is uncertainty causing loss of business confidence and further decline in capital expenditures and investment. That would reinforce the collapse in productivity — which is very pronounced in the U.K. — and make for an even worse outcome in terms of potential growth.

Q: How does it affect the EU?
A: If you put the Brexit vote against a very clear decline in trust and confidence of the citizens of Europe in the EU and its institutions, and the rise in populism and anti-Brussels, anti-EU, anti-integration sentiment, the contagion risk of a successful Brexit vote will be quite
damaging. Periphery countries have undergone a lot of adjustment after the crisis. The cost of fiscal consolidation is perceived to be quite significant and unfairly distributed, so there could be a lot of discontent, and that will support the further rise of populist poltical movements.

Q: What does Brexit mean for trade?
A: The mood is anti-immigration and anti-free trade. In the past year, more than 500 trade protectionist measures have been implemented by governments worldwide, more than twice the number of such measures two years ago. Against ths anti-immigration, anti-free trade public mood — even here in the U.S. — the risk of a further increase in trade protectionism is high. That would continue to depress the growth of world trade, which actually fell in volume terms by 1.6 percent, year-over-year in the first quarter.

Q: How significant was that?
A: There has been some small decline, particularly after 2008-2009, but this is one of the rare instances of outright decline.

Q: Do you expect Britain to exit?
A: I’m an Anglophile, so I believe in their basic reasonableness. I think that reason will prevail — that’s the hope. Everything we have seen in the past 10 days seems to be suggesting that the momentum for “leave” is really accelerating, so that is worrisome. Another lesson we learned in elections is that big momentum is what tends to carry the day.

Just more proxy-scaremongery? Unclear at the moment but markets are certainly acting like this is the case.

But in a new and improved way to scare people, UK Chancellor George Osborne ‘warned’ that taxes would have to rise if Britons voted to leave The EU… (via Bloomberg)

Reduced trade and investment would leave a 30 billion pound ($42 billion) “black hole” that would have to be plugged by increased taxes and cuts to spending on health, education and defense, Osborne is set to say in a speech on Wednesday. The increasingly confident “Leave” campaign will meanwhile be talking about its agenda should it win, pledging legislation to restrict free movement and reduce the influence of EU judges, with the goal of negotiating a so-called Brexit by 2019.

While they’re talking about the next four years, the focus of both sides is the eight days until the June 23 vote. The goal of “Leave” is to reassure voters that departure from the EU would be swift but controlled. Osborne’s aim is to convince waverers that it will hurt. 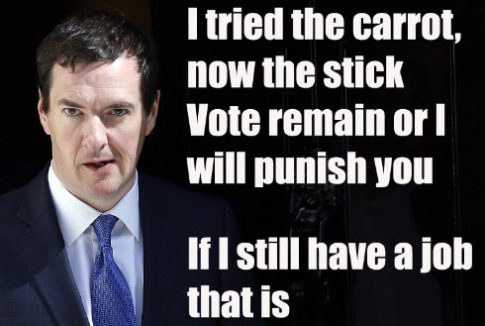 “Far from freeing up money to spend on public services as the ‘Leave’ campaign would like you to believe, quitting the EU would mean less money, billions less,” the chancellor will say, according to his office. That would mean “an emergency budget where we would have to increase taxes and cut spending.”