Defense Minister Panos Kammenos was proud to announce a joint Greek-Russian project: the co-production of Kalashnikov riffles in a factory in Aigio in northern Peloponnese. But the manufacture will not start tomorrow.

It will start as soon as the European Union ends the embargo on Russia. Only then Greece will seek to obtain a license to manufacture Kalashnikov assault rifles.

“We are ready to begin manufacturing Kalashnikovs in Patra as soon as the Russian embargo is over,” Kammenos told the defense parliamentary committee on Tuesday evening. The Greek Arms Industry (now Greek Defense Systems) would manufacture the assault rifles, he said. ?owever he did not elaborate whether 100% of the production will take place in Greece or just part of it or just fitting.

He added that “with approval and certification by the NATO, Greece would be able to sell the rifles to any member of the North Atlantic Alliance.” 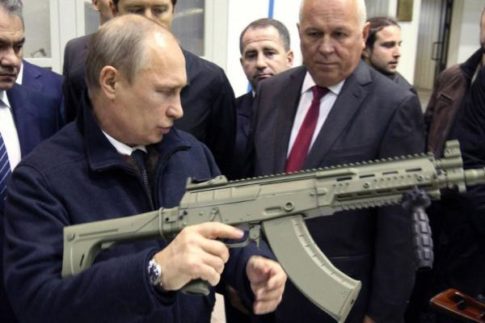 The verbal proposal for the co-production was made by Russia reportedly already a year ago, during Kammeno’s visit to Moscow.

Panos Kammenos said further that the GDS has already activated agreements with India  and the GAI expands its partnerships with Dassault and Lockheed-Martin , while partnership with Egypt is under consideration.

While this is ‘great’ news, we won’t be holding our breath for Europe (vassal states of Washington) and NATO (US) to agree to making Kalashnikovs for Russia on their own turf. Once again, the resignation of sovereignty to a central union reduces Greece’s ability to freely find growth opportunities.