Iceland has had a difficult past few months politically, as its Prime Minister Sigmundur David Gunlaugsson became the first casualty of the Panama Papers.

Economically however, the story is more upbeat, as the country has rebounded since the financial crisis. The Icelandic Krona has stabilized against the Euro, the rate of change in inflation has slowed, and the country has recorded year-over-year growth in GDP each year since 2011. 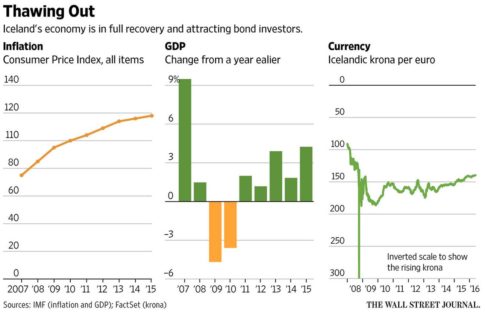 However, in a shocking turn of events, a law passed on May 22 by Iceland’s parliament is offering the foreign holders of about $2.3 billion worth of krona-denominated bonds a choice of either selling out in June at a below-market exchange rate, or have the money they receive upon maturity be impounded indefinitely in low interest bank accounts. In other words, Iceland is trying to kick out foreign investors.

For now, investors aren’t interested in the deal and wish to stay invested in Iceland, even as officials are clearly trying to push foreign investors out.

Investors, including Boston-based mutual-fund companies Eaton Vance Corp. and Loomis Sayles & Co., a unit of Natixis SA, don’t want to go. They say they will reject the government’s offer.

“We would like to stay invested,” said Patrick Campbell, a global bond analyst at Eaton Vance.

The dispute is the result of a wholesale turnaround in Iceland’s relationship with foreign investors.

The country became synonymous with financial alchemy after its banks ballooned by borrowing in bond markets and attracting foreign depositors with high interest rates. That system imploded in 2008 when depositors made a run on the banks just as their bonds fell due, causing the krona to sharply devalue against the euro.

Yet a growing number of fund managers are now buying Icelandic government bonds, including those that were marooned on the island when it applied capital controls. The country is now one of the few offering a combination of high interest rates and strong economic growth prospects.

Eaton Vance and another holder of the legacy debt, also called “offshore” debt, hedge fund Autonomy Capital LP, have been courting the government for months to allow them to keep their cash on the island, even offering to swap their holdings into long-term bonds that they would pledge to hold on to.

But the country isn’t interested. Instead, officials behind the law say they aim to keep the $16.7 billion economy of the island with a population of 327,386 from being swamped anew by the ebb and flow of offshore funds.

“We don’t need the money,” said Mar Gudmundsson, governor of Iceland’s central bank. “These are remnants from the last boom and bust, and we are not going to repeat that mistake.”

Iceland has had formal capital controls since it barred conversions of krona to foreign currencies during the 2008 crisis, boxing in foreign bondholders at that time as well. While the controls are still in place, the country has made the first step in easing some of the controls, as it recently negotiated a deal with creditors that paved the way for payments to be made to those holding distressed bank debt left over from the crisis.

Investors deciding to stay invested with Iceland are playing a dangerous game of chicken with the government on whether or not capital controls will be lifted in any reasonable amount of time. It has taken nearly seven years for creditors to get money out of the country after the financial crisis, and although the krona has stabilized since its plunge and the economy is back on firmer footing, nobody can know for certain just how long investor cash will be tied up in Iceland’s low yielding bank accounts before controls are finally lifted.