Water tankers are being sent to the worst-affected areas as a severe drought is accompanying the intense heat.

A record temperature has been set in India, where the mercury rose to 51 degrees Celsius (123.8 Fahrenheit) in the north-western town of Phalodi.

The previous record of 50.6 Celsius had stood for 60 years.

That, too, was set in the state of Rajasthan – recorded in the city of Alwar in 1956.

This is the second year that India has experienced very high temperatures.

Its Meteorological Department issued a heat alert for Delhi on Wednesday when a temperature of 47 degrees was recorded in the capital.

Alerts have also been issued for three states – Gujarat, Madhya Pradesh, and Rajasthan.

Temperatures are not expected to drop until late on Saturday, while this year’s monsoon rains are predicted to be late.

A quarter of the population – around 330 million people – are now affected by water shortages, because of a drought accompanying the heat.

The government is sending trains and tankers to parts of central India where drinking water is in short supply. 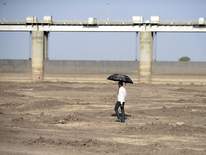 According to the Central Water Commission, water availability from the country’s 91 reservoirs has fallen to 29%, the lowest in a decade.

Wells have run dry in thousands of villages and ground water has become depleted.

River levels have fallen considerably, too.

Crops in more than a dozen states have been destroyed.

Some people have moved to camps where livestock can be provided with fodder and water.

In an attempt to lessen the effects of future heatwaves, the federal government is planning to interlink rivers in a project forecast to cost $168bn.

The intention is to move 174 billion cubic metres of water annually from one area to another.

May is typically the hottest and driest month in India.

During last year’s heatwave, 2,135 people died because of the soaring temperatures.

This year’s statistics are yet to be released.